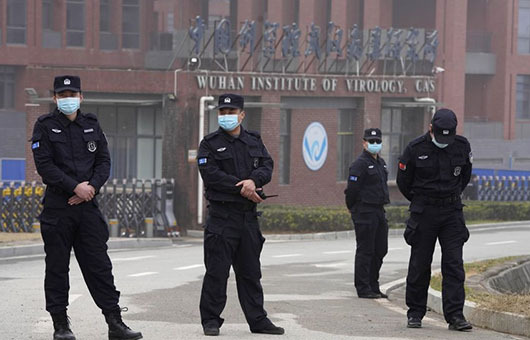 wivcov by Ng Han Guan is licensed under AP N/A
Security personnel gather near the entrance of the Wuhan Institute of Virology during a visit by a WHO team on Feb. 3, 2021.
by WorldTribune Staff, December 18, 2022

Republicans on the House Permanent Select Committee on Intelligence said there are “indications” that the Covid virus could have originated as part of communist China’s bioweapons research program.

“Contrary to the implication of the [Intelligence Community’s] declassified report, based on our investigation involving a variety of public and non-public information, we conclude that there are indications that SARS-CoV-2 may have been tied to China’s biological weapons research program and spilled over to the human population during a lab-related incident at the Wuhan Institute of Virology,” said a summary of a report from GOP members of the committee, Fox News reported on Wednesday.

“The IC (Intelligence Community) failed to adequately address this information in its classified Updated Assessment. When we attempted to raise the issues with the IC, it failed to respond,” the GOP committee members' report said.

This scenario — commonly referred to as the “lab leak theory” — has long been questioned by a number of journalists and elected officials, though they were largely dismissed and referred to as “conspiracy theorists” over the course of the pandemic.

Previous government guidelines have cast doubt on the lab leak theory and instead argued that the virus naturally jumped from bats to humans at a wet market in Wuhan.

A declassified assessment on the origins of Covid by the Office of the Director of National Intelligence in October 2021 states that SARS-CoV-2 was “probably not a biological weapon.”

“The Committee believes the IC downplayed important information relating to the possible links between Covid-19 and China’s bioweapons research based in part on input from outside experts,” the Republican committee members said, adding that the intelligence community “refuses to be transparent with the Committee regarding which experts it relied on.”

“Nor do we claim the information we have found is a smoking gun that definitively resolves the question of the origins of Covid-19 beyond all doubt. However, the information is important to furthering the public’s understanding, and we will seek to declassify the classified version of our report in the next Congress to further the conversation.”

wivcov by Ng Han Guan is licensed under AP N/A