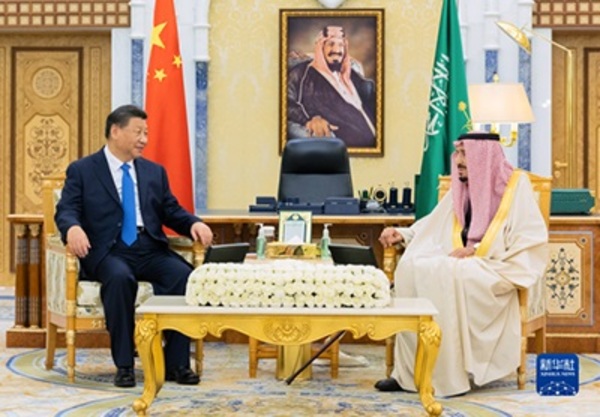 A powerful wind from the East is blowing across the Arabian desert. During a significant but overlooked three-day visit to Saudi Arabia, China’s leader Xi Jinping has scored a “strategic partnership” with oil rich and strategic Saudi Arabia.

For China in its presumably post-COVID era, the focus remains energy security and economic revival. For Saudi Arabia, the plan is to widen its global alliances and lessen its traditional dependence on the longstanding U.S. partnership.

Thus, for both countries there’s the revival of the relationship between communist China and the Kingdom of Saudi Arabia, while at the same time snubbing Washington.

Saudi Arabia and China have agreed to expand their relations and seek to “develop a comprehensive strategic partnership relations between the Kingdom and China” on all international and regional issues of common interest.

In a wide-ranging 4,000 word joint statement both Riyadh/Beijing “reaffirmed that they will continue to firmly support each other’s core interests, support each other in maintaining their  sovereignty and territorial integrity.”

Importantly, “the Saudi side reaffirmed its adherence to the one-China principle.”

For Beijing “core interests” means a non-negotiable strategic stance towards Taiwan, Tibet, Xinjiang and the South China Sea.  This is China’s sphere of influence to put it bluntly, key regions where it will not compromise. In other words, red line interests.

The two sides stressed the importance of deepening cooperation in regard to “Belt and Road Initiative” welcoming the related Saudi companies’ involvement in various energy and investment partnerships. On the commercial side, China plans to invest $29 billion in Saudi Arabia to establish a Huawei cloud computing center and to build an electric vehicle manufacturing plant.

The two sides “reaffirmed the rejection and denunciation of terrorism and extremism in all its forms.” Both countries pledged, “not criticizing each other’s internal policies” which brings to mind the Beijing regime’s brutal treatment of Muslims in Xinjiang or the Saudi conduct towards  their own opposition.

In the medium term what does the emerging Sino/Saudi political rapprochement mean for U.S.  strategic interests in the Middle East?

American President Joe Biden was snubbed by the Saudis during a visit to the Kingdom earlier this year. Earlier the Administration has vowed to make Saudi a “pariah” for its treatment of dissidents such as murdered writer Jamal Khashoggi. Equally Biden later got into a spat over oil production quotas. Nonetheless Saudi/American relations have historically been challenged by occasional political bumps but have maintained equilibrium given the overriding geostrategic role the Kingdom plays in the Middle East and its importance to U.S. policymakers.

The Saudis sense of the weakness of the U.S. Administration in the wake of the appalling and disastrous Afghan fiasco as well as sending mixed messages in dealing with the Iranian regime.

Do the Saudis see an emerging American power vacuum the Middle East? Perhaps. Thus, we can expect closer political and economic cooperation between Beijing and Riyadh, think Belt and Road and China’s other grand geo-commercial projects. China needs Saudi petroleum.

But in the near and middle term China stands in no military position to supplant the USA to fill the strategic void.  At the same time the U.S. provides the vital security deterrence from rogue states such as Iran.

John J. Metzler is a United Nations correspondent covering diplomatic and defense issues. He is the author of Divided Dynamism the Diplomacy of Separated Nations: Germany, Korea, China (2014). [See pre-2011 Archives]
xisalmn by N/A is licensed under Screen Grab N/A