RINOs and their media slam the Trump-powered GOP; But what about vote fraud? 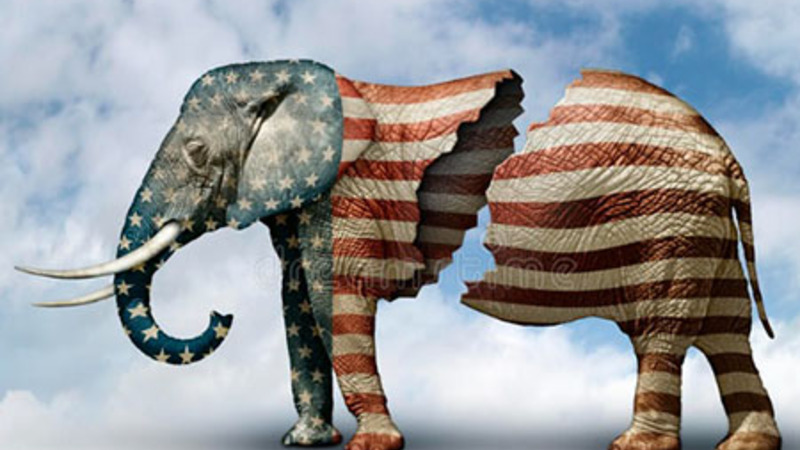 Via their power of extraordinary hindsight, "conservative" media are picking at the carcass of the Grand Old Party following a disappointing midterm election season that ended on Tuesday with Herschel Walker's loss to incumbent Democrat Sen. Raphael Warnock.

Establishment Republicans at Fox News, the Washington Times, the Washington Examiner and other subsidized outlets, are blaming Donald Trump for Walker's loss and the GOP's less-than-stellar performance, singing harmony with the Ruling Class on both sides of the aisle.

“When Republicans see Chuck Schumer presiding over the United States Senate, they have no one to blame but Donald Trump,” Bill Palatucci, a member of the Republican National Committee from New Jersey, told The Washington Times.

Trump campaign spokesman Steve Cheung slammed the Republican establishment in Washington, saying: “Weak establishment Republicans continue to scheme and work against the ‘America First’ agenda, even if it means jeopardizing a Senate seat because they refused to fight alongside President Trump and the movement."

Cheung added that Trump’s support was the “most highly sought-after endorsement in political history.” He noted that of the 254 candidates Trump endorsed, 232 won, which “led to the firing of Nancy Pelosi as speaker.”

Others who don't possess the same hindsight power as the establishment cheerleaders at Fox, the Washington Times, and elsewhere, such as TV and radio host Mark Levin and independent journalist Emerald Robinson say the problem is not Trump or MAGA but a "Washington-centric" Republican Party.

Levin addressed why Republicans continue to lose elections, what the position of Senate Republicans is, and what exactly is the GOP agenda:

"In fact, this bunch isn’t worth a bucket of warm spit.

"At every turn, this gang of geriatric invalids and psychological inferiors displayed their complete contempt for their own voters in 2022. It’s not just that they hate President Trump — they hate Republican voters. As for traditional GOP values, they have turned on them too. They have gone out of their way to “flip the bird” at conservative principles like limited government, restricted government spending, legal immigration, free speech, gun rights, and religious freedom.

"In fact, they have enthusiastically joined hands with Democrats on bill after bill recently — in a concerted attempt to disabuse the American people of the antiquated notion that we have a two-party system."

The tug-of-war between pro and anti-Trump forces is playing out at the Republican National Committee, where the current chair, Ronna McDaniel, is set to keep her lofty position despite a 2022 performance that would have her heading for the bench or being outright released by most teams.

Lee Zeldin, a pro-Trump Republican who came very close to upsetting New York Democrat Gov. Kathy Hochul last month and who is largely credited with a slew of GOP victories in the Empire State, announced on Wednesday that he’s holding off – for now – on running for RNC chair.

“I am grateful for all the messages I have received from across the country the past few weeks encouraging me to run for Chair of the Republican National Committee,” Zeldin said in a statement on Wednesday. “Change is desperately needed, and there are many leaders, myself included, ready and willing to step up to ensure our party retools and transforms as critical elections fast approach, namely the 2024 Presidential and Congressional races."

“However,” Zeldin added, “the issue is Chairwoman McDaniel’s re-election appears to already be pre-baked, as if the disappointing results of every election during her tenure, including yesterday in Georgia, do not and should not even matter.”

Harmeet Dhillon, an attorney who is also an RNC committee member from California and who served as a Trump campaign legal adviser, announced her bid on the Fox News Channel on Monday night.

"Republicans are tired of losing, and I think that we really need to radically reshape our leadership in order to win," Dhillon said in an interview on Fox News’ "Tucker Carlson Tonight."

Meanwhile, none mentioned the fact that millions of Americans no longer trust a computerized election system that allows Internet access.

"We now know for a fact 2020 was rigged and stolen. By a collusion of Big government, Big Tech and in particular, the FBI, who together held weekly meetings to suppress any information beneficial to Trump, and any stories harmful to Biden. They blacked out any mention of Biden’s corruption, his clear case of dementia, and in particular, the Hunter laptop scandal.

"And now I’m telling you again. Our elections are still being rigged and stolen. The Georgia U.S. Senate election is Exhibit A. I’ve predicted for two weeks now that Herschel Walker didn’t stand a chance of winning. Because Georgia is rigged.

"You’re being gaslighted. This is all B.S. ... Scripted. Georgia shouldn’t shock you. The same things happened in Arizona and Pennsylvania. Michigan, Wisconsin and Nevada weren’t much different. It’s just that the Republican losses in those states weren’t quite as shocking.

"But I have news for the GOP. Your base isn’t that dumb. We all know. We all see what’s happening. We’re angry, demoralized, and ready to walk away from the GOP. The biggest issue isn’t losing. It’s watching the rigging, cheating and theft of elections, while the GOP leadership says nothing. While our GOP leaders play golf and attend state dinners with Hunter Biden, the country is being stolen and destroyed.

"Just study Florida. It’s not about good or bad candidates. It’s about strict voting laws that don’t allow mail-in ballots, ballot drop boxes, ballot harvesting, and 100 other forms of voter fraud that Democrats specialize in. All the same fraud that just went on in Georgia, Arizona and Pennsylvania."