romgol by N/A is licensed under Screen Grab N/A
Special to WorldTribune, July 13, 2021

Gold is the oldest asset known to man. First mined roughly 6,000 years ago in Eastern Europe near Georgia, today it is found in every expanse and corner on earth. We wear it, put it in our safes, conduct electricity with it and still fight wars over it. It remains a stable store of value and medium of exchange after the most powerful attempts by governments to control it. Today, let’s explore whether it is worth it for us to chase after a little of this beautiful, shiny object.

The phrase, “The gold standard,” has meaning because people have believed in the unassailable nature of gold for thousands of years. Ancient cultures used several different metals for coinage, but gold was always the standard.

The first paper money was introduced in China around the 12th century, but it wasn’t until the last 50 years that nations removed all gold backing from their currencies and went entirely fiat. Apparently, countries felt less of a need to control gold after they removed the currency pegs, which means it is legal to own and trade in just about every country in the world, including China.

It is estimated that roughly 200,000 tonnes of gold have been mined from the beginning of time and experts believe 50,000 tonnes are still in the ground. The American government, the largest gold owner in the world, has about 8,000 tonnes. The price of all these tonnes has fluctuated mostly from supply and demand and occasionally from government interference.

It is not unusual for a security to take a break after spending so much energy covering so much ground. The move to last year’s high was a 75% advance in less than two years.

The unusual part is the time it is taking for gold to follow through on that new high. It has been almost a year and the handle for that deep cup doesn’t seem interested in resolving itself soon.

It also doesn’t look like it wants to break down, either. 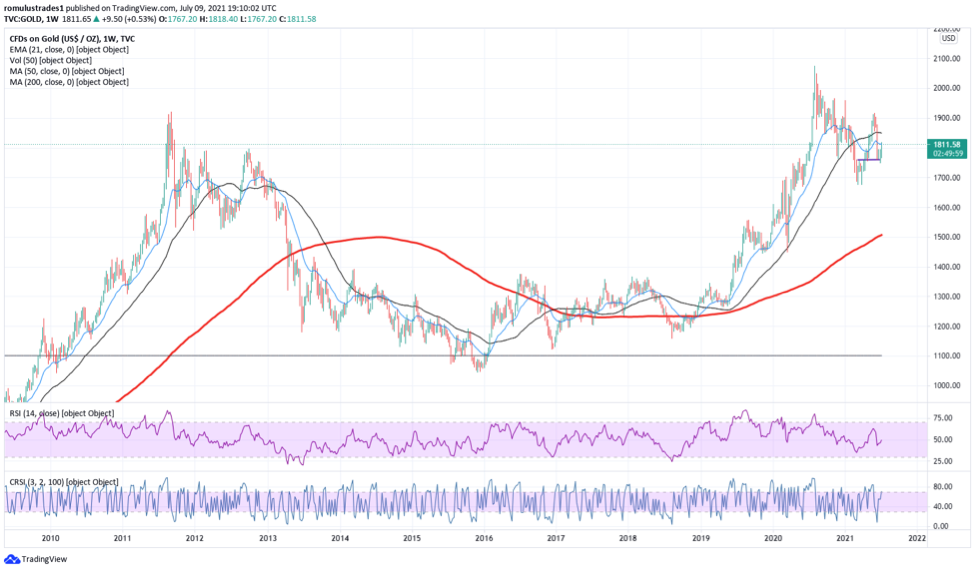 I have a theory about why gold is stuck in neutral for the past year. Cryptocurrencies.

The acolytes say that bitcoin is the digital equivalent of gold for the next thousand years. Bitcoin is currently in a bear market, but it is up significantly from 10 years ago. I believe that if there were no bitcoin, gold would already be at $3,000 an ounce and heading higher. It has competition from the crypto set and that may have kept prices in check.

Even with the competition from bitcoin, it is highly probable that gold will eventually follow through with the break-out above $2,000.

A pattern like this can normally be counted on to deliver large returns, but it could take a while (as already witnessed). $3,000 is the bare minimum target in the next few years. Gold can easily hit $5,000 and more before the end of this decade.

There are some challenges to owning gold that do not exist in other investment vehicles. Selling at a profit for gold held more than a year will result in a 28% capital gains tax instead of the current long-term rate of 20%. In addition, taking physical possession is awkward and sometimes dangerous. There are imperfect solutions to both challenges.

Two major gold exchange traded funds came on the scene 13 years ago that make it easier to own gold than ever before. IAU and GLD are very liquid ETF’s with big institutional support. Buying them in a retirement account means avoiding any capital gains taxes.

Holding them for long periods of time does result in a little decay of price from the actual metal, but it is minimal today and worth it for the convenience. The annual fee on GLD is 0.4%. IAU is better at 0.25% basis points. You can buy IAU and stash it for 10 years with no hassle and very little slippage from gold itself.

We may not know exactly how much gold is still in the ground, but we know God isn’t making any more of it.

Watch for future announcements from Romulus about future profitable market moves, important indicators, and major market swings. For more information about trading education or to trade with Romulus, contact John Reed at john@groktrade.com or go to www.groktrade.com/romulus.

In his real-life existence, Romulus started on Wall Street in 1994 and traded for a hedge fund for 13 years. For the past 12 months he has been a teacher and mentor working for Grok Trade, a stock trading educational company in business since 2007.
romgol by N/A is licensed under Screen Grab N/A

Who shot Ashli Babbitt, and other key questions won't be addressed by Jan. 6 commission
© 2021, Trib 247, all rights reserved