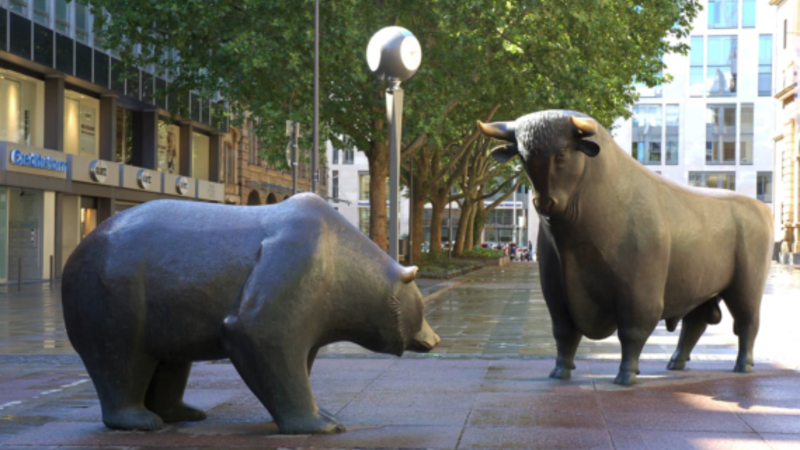 BullsBears by Photo by jimbonumber9 is licensed under WorldTribune.com NA
N/A
Special to WorldTribune, September 10, 2021

Today, let’s delve into a little market history and create a template for what we might be facing over the intermediate term.

In the 1930s, stocks rallied another 80% from that 1933 high, but it took four years to get it done. It is also worth noting that the market never eclipsed those 1932 lows, even during the worst periods of World War II. Stocks developed enough momentum after the spring of 1932 to carry the market higher during the rest of the Great Depression and the war.

The fact that today stocks have doubled in less than 18 months could be telling us something about the next 18 months. The most likely scenario is that regardless of any selling over the short and intermediate term, the ultimate high of this bull market has yet to be seen. Too much long-term momentum was built up until recently. Combine that with a very accommodative federal reserve and conditions for a continuing bull market remain.

There is a difference, however, between a coming bear market (which does not seem imminent) and a good, old-fashioned correction. Jarring pullbacks are part of every bull market, and this one is not immune to such an event.

It has now been 10 months since the S&P 500 fell more than 6% from a recent high. That is a long stretch of great weather. We don’t have to go back much further in time to find a few storms in the stock market.

On September 2nd, 2020, the S&P hit a new high of 3,588 after a strong August that was fueled by the coming stock splits of Apple and Tesla. Those companies split their stocks, then bam! The S&P fell 10.5% over the next 3 weeks. A few months before that, a powerful rebound from the March lows left stocks overbought, which led to a 6.5% fall in one day on June 11th.

The early stage of a new bull market is met with severe skepticism from investors as they hold onto their fears from the previous bear. After the first 3 to 4 months, though, people start to believe and get on board. They pour more and more new money into the market and that turns into enough gas to overcome short-term bouts of selling and volatility.
Conversely, after such a long stretch of only mild pullbacks, investors get complacent . . . and lazy. There were a few situations like that after the March 2009 bottom.

The first started in the middle of April 2010. Stocks were up 83% from that famous 2009 low when a very unexpected selloff kicked most investors right in the teeth. The S&P fell 17% over the next 2.5 months. It took another eight months for stocks to get above those April highs.

Another, even deeper correction struck a little over a year later in late July 2011. Stocks cracked almost 20% in nine weeks. It was seven months before the market fully recovered those losses.

Even though the corrections of 2010 and 2011 were a little bone rattling, at least the rebounds came along in short order. If you added money to the market at any point after it was down 8% or more, you were making money in a month or two.

After accounting for dividends, the S&P was flat in 2015 and was only up 2% for the year the day of the 2016 presidential election. Stocks were about the same level they were at in late 2014, with no net progress for almost two years. There was a 15% correction along the way, but don’t worry, it only took six months to unfold.

I am not a curmudgeon, or a perma-bear, nor am I interested in raining on any parade. I simply want to point out that during the longest bull market in American history — from March 2009 to February 2020 — there were some difficult market periods.

I want my readers to understand these historical times and be prepared for something like that to come around again, because it is a growing likelihood that we are on the verge of just such an event.

It is also important to acknowledge that an increasing probability does not guarantee the outcome. It is possible that global investors will believe the dangerous nonsense coming out of Fed chair Powell’s mouth and keep the rally alive for a long time.

That is possible, but not likely.

The internal condition of the general stock market has been slowly deteriorating for several weeks now. With the market overbought but not dramatically so, it is difficult to determine precisely when a correction might begin. It is also not possible at this point to estimate how strong the selling will be when it kicks in.

The best course of action under these circumstances is to sell any seriously lagging positions, keep closer than normal stops on remaining stocks, and do not initiate any new long positions until better weather appears.

For those who trade with us in Club Romulus, keep following the buy and sell alerts with Firmus—our portfolio that takes advantage of temporarily overbought and oversold conditions to make profitable trades lasting usually only a day or two.

With the S&P 500 up 18% for the year, Firmus is up over 20%, having had 52 winning trades and only two expense trades. When the S&P drops, Firmus will continue to make money.

Readers who took my advice on AMZN and TSLA earlier this month will now be up nicely. To apply my advice on tight stops, they can be just below the 50 period moving average (black) for AMZN or the low of the previous day for TLSA on the charts below. 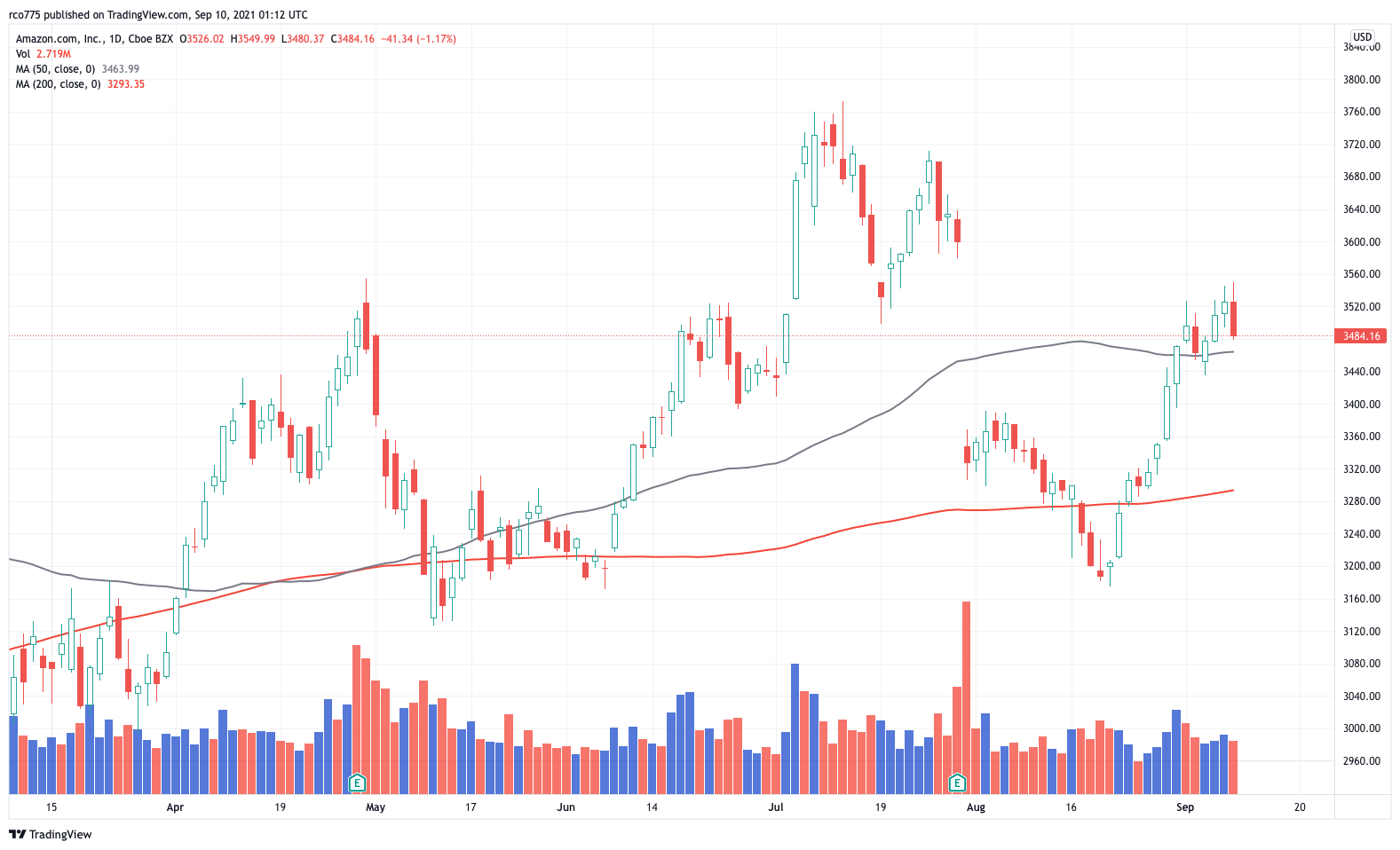 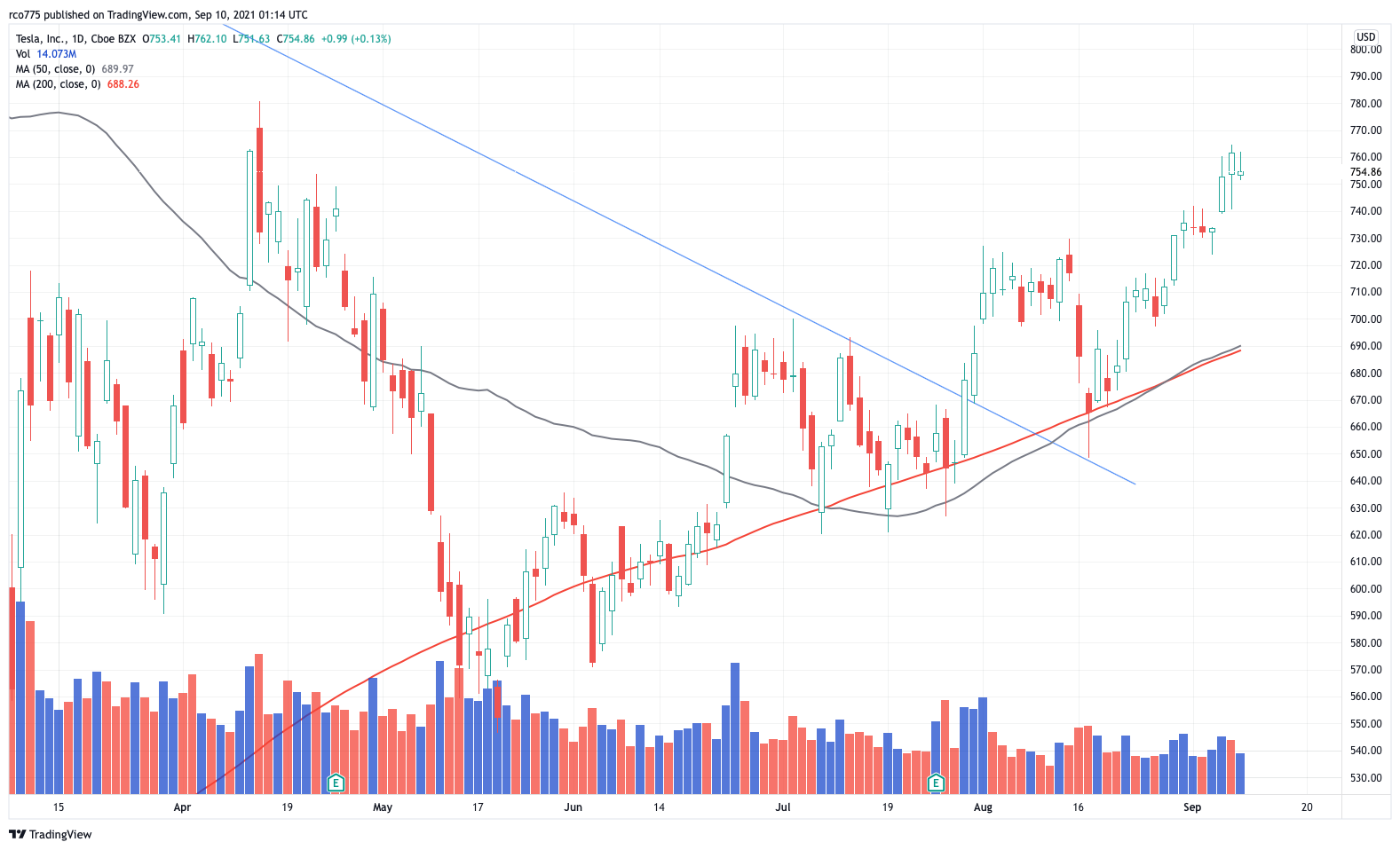 Watch for future announcements from Romulus about profitable market moves, important indicators, and major market swings. For trading education or to trade with Romulus, contact mentor@groktrade.com or go www.groktrade.com/romulus.

In his real-life existence, Romulus started on Wall Street in 1994 and traded for a hedge fund for 13 years. Since 1994, he has called every major market top ahead of time and profited from them, including the break of the Dot-com bubble in 2000, the market crashes of 2008 and 2009, and the Covid crash of 2020. For the past 12 months he has been working with investors and traders to actively manage their portfolios by growing wealth, not risk, as a teacher and mentor working with Grok Trade, a stock trading educational company in business since 2007.


BullsBears by Photo by jimbonumber9 is licensed under WorldTribune.com NA