Romulus report: Oil, the Fed, and horror at the pump 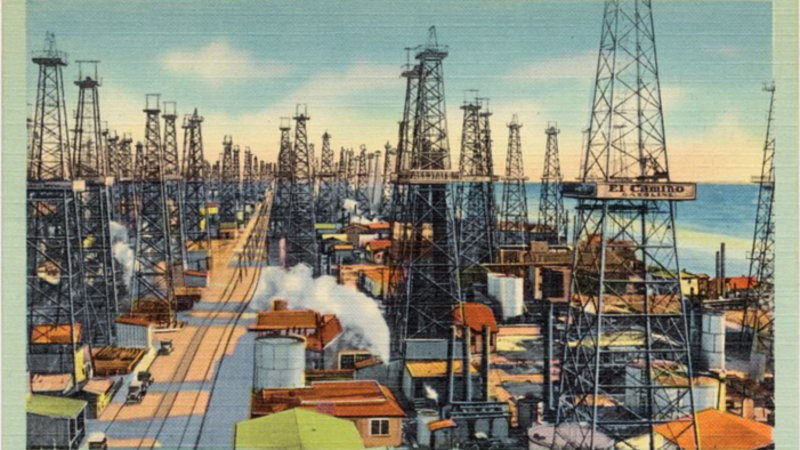 Halloween is a social time with gatherings large and small. Talk of ghosts and ghouls and scary things, and football and of Fall. One point, one topic that wouldn’t stop, it rose among the ranks. How much more do we have to pay to fill our bloody tanks!

Yes, we are talking about oil today and the persistent run it’s been on since Aug. 23rd. A barrel of oil cost 37% more today than it did a little over three months ago.

I was at a Halloween party and I heard someone say in terror, “I just spent $78 filling my car!” The vehicle she was referring to is a mid-sized SUV. Several more tales of horror followed.

People want someone to blame for higher gas prices.

President Biden’s approval rating just dropped to the lowest point of his presidency and rising energy costs are the scapegoat of the day. There is some truth to this as he shut down further development of the Keystone Pipeline in addition to supporting a culture of lower fossil fuel consumption.

It’s ironic, don’t you think, that global leaders are in Scotland today at a major climate change summit because of a climate problem caused in part by burning fossil fuels but they are also going to ask OPEC to increase oil production so we can burn more fossil fuels.

The president is getting blamed for this situation but most people overlook the real reason oil is selling for almost $85 a barrel right now. It is the same institution that helped create the dot-com mania and the financial crisis. Today its actions have encouraged an environment where a pixelated cat can sell for millions of dollars. A market in which something that was nothing went from $10 to $67,000 in 10 years (bitcoin). A global economy where people get rich from engineering money more than engineering quality products (with a few exceptions like TSLA and AAPL).

The fault of the current $85 oil problem lies at the feet of the U.S. Federal Reserve. Once again, it is showing a greater interest in political popularity than economically sound decisions.

It does not matter to us whose fault it is or what those mistakes will do to market prices. We watch the charts and react accordingly.

If oil drops to around $78 a barrel, there will be an opportunity with some strong stocks like DVN and VNOM (I still own this).

If oil is dragged up to that mystical $100 number without experiencing a pullback, well, that is called someone else’s money. No problem, the market is loaded with good ideas these days.

The big event for this week is the Federal Reserve meeting, which concludes Wednesday afternoon. I don’t expect anything dramatic as Fed officials have telegraphed their plans since the Jackson Hole gathering in late August. Tapering will start this month with a total wrap-up by July. Any language regarding interest rate increases will be slightly more conservative than what we heard from the European Central Bank last week, which was "no rate hikes until mankind discovers the warp drive."

They will be wrong in both cases. Rates are going up, probably by July. The central banks are behind the curve. The evidence is overwhelming.

High oil prices are the foundation of the inflation we are all living with now and price increases are starting to get passed through in almost every economic sector. Labor costs are going up and it is only the beginning of this trend. Soon, we will see price increases in the services sector and when that happens, our friends at the Fed will feel a shudder.

A main tenet of my teaching is to allow market prices to guide you in life. I have benefited financially from this rising inflation:

I bought VNOM in early May for $17.50 a share (adjusted for dividends and covered call sales), meaning I’ve made over 26% in less than six months from an oil stock.

I am up almost 50% in 13 months one of the portfolios I trade, with all those gains coming from a rising stock market (inflation shows up in many places). I’ve made more than 65% just from dollar cost averaging Ethereum for the last nine months.

Do you think any of these cryptocurrencies would be near current prices if the S&P 500 was down 35% instead of up 110% in the last 19 months?
Inflation, baby!

Eventually, however, the Fed-induced liquidity drain will create downward pressure in the price of almost everything — including the stock you love and think is impervious to any real setback.

For trading education or to trade with Romulus, contact mentor@groktrade.com or go www.groktrade.com/romulus.

About the author: In his real-life existence, Romulus started on Wall Street in 1994 and traded for a hedge fund for 13 years. Since 1994, he has called every major market top ahead of time and profited from them, including the break of the Dot-com bubble in 2000, the market crashes of 2008 and 2009, and the Covid crash of 2020. For the past 12 months he has been working with investors and traders to actively manage their portfolios by growing wealth, not risk, as a teacher and mentor working with Grok Trade, a stock trading educational company in business since 2007.
Oil by Wikimedia Commons is licensed under WorldTribune.com NA