housing by N/A is licensed under yournorthcountry.com N/A
N/A
Special to WorldTribune, November 11, 2021

Zillow bought a bunch of homes, then broke investors’ hearts.

The stock is getting hammered as the company prepares to sell thousands of houses at a loss. This has some experts calling for the end of the housing market for the second time this century.

As usual, there is a lot more to this story.

Eighteen months ago, Zillow came out with a big endeavor to purchase residential real estate on a scale never before seen in America. The company had placed themselves in the center of search and information discovery for the housing market, becoming the Google for real estate. They wanted to monetize this valuable data treasure and they thought making fast all-cash offers was a way to do that. There was an algorithm involved and for the next 12 months they went on their merry way of buying houses all over the country.

A model like this only works when very low-ball offers are accepted. Think pawn shop. The algorithm wasn’t making low ball offers, however.

In many cases they paid more than the asking price. 2020 was the hottest housing market since 2006 and sellers knew it. Zillow got caught up in this and got caught with bloated inventory they couldn’t unload. Now they have to dump these houses and will lose millions of dollars in the process. The stock reflected this problem last week, dropping 40% in three days.

With the Zillow fire sale about to begin, some people believe the supply increase will drag down the entire US housing market. This is extreme, and also not based on analytical facts.

Zillow is lucky that home prices are up again this year. The average selling price in 2021 should come in about 9% over last year (a slowdown over the 2020 pace, but still amazing). With my expectation that the bull market on stocks should generally remain in place for quite a while, prices for most assets (including real estate) will have support.

Home prices will probably not advance 9% in 2022, but a 4% gain seems within reach. Remember, home prices have advanced an average of 3.1% a year for over 200 years. There will be a reversion to this mean, but it could take a few years to play all the way out.

There also might be an opportunity in this Zillow dumpster. On a national level home prices will not be affected by the increase supply from Zillow. There could be pockets where they own a concentrated number of homes. If you are into real estate, start looking there.

At some point Zillow, as a stock, could be something to look at, but I wouldn’t hurry on that. Z is probably heading lower over the next few months.

In 2020, Home Depot was a poster stock for the strong housing market. The stock went up 23% last year, beating the S&P 500 by a bit. After a period of consolidation from early May until a month ago, the price of HD broke out higher again. I believe in the power of markets and I listen to them more than I listen to any other expert alive (including myself). With Home Depot sitting at a new all-time high now, it is unlikely that the general housing market is about to tank. HD would already be smashed if that were the case. 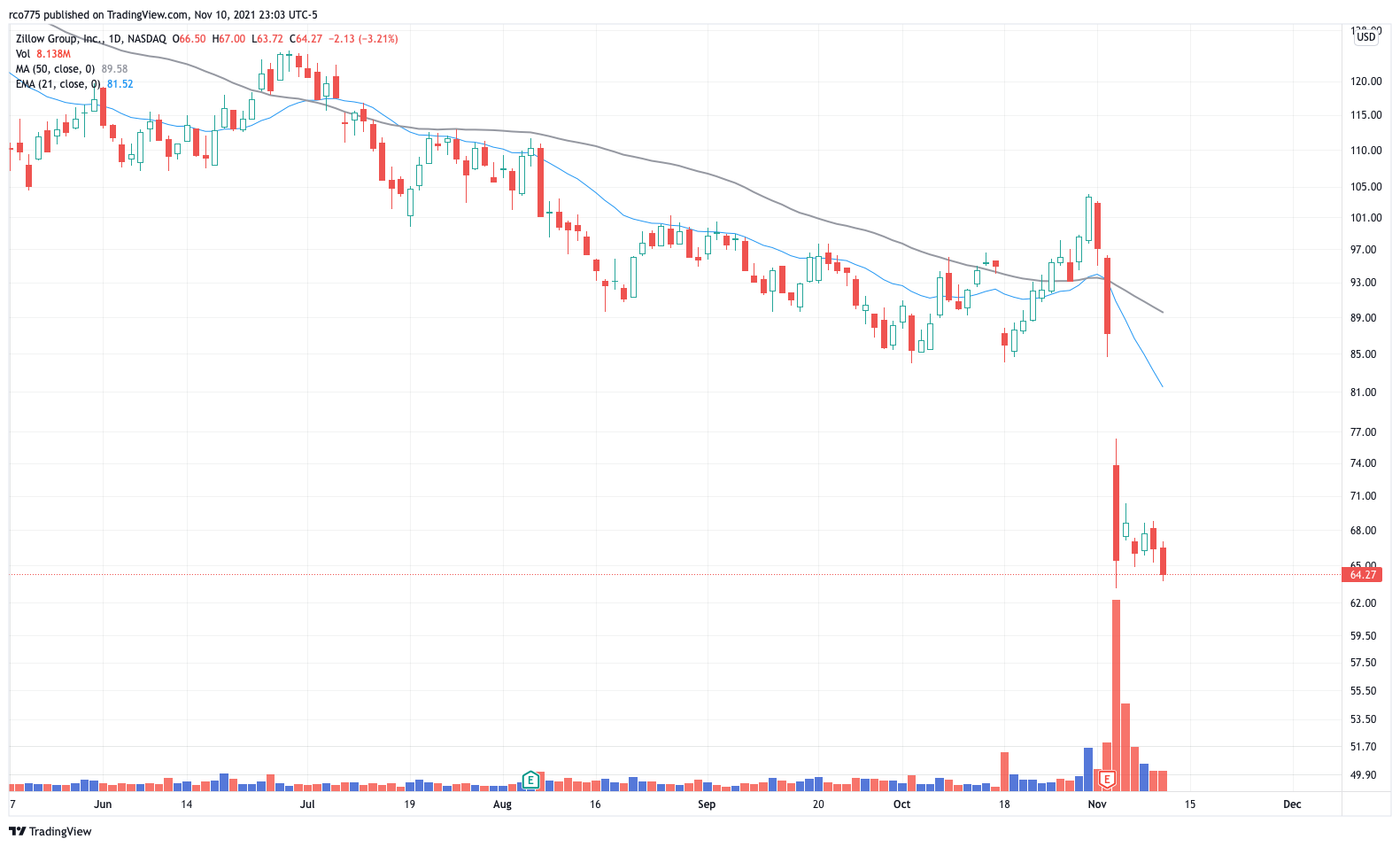 As for the homebuilder stocks, it looks like the ETF for the group, ITB, just entered what should prove to be a confirmed uptrend. The larger names in the group, Lennar and Pulte, are not that inspiring now, though. The analysis suggests, however, that the housing market should be fine for a while.

Zillow missed a great opportunity because they became distracted by a shiny new idea.

In his real-life existence, Romulus started on Wall Street in 1994 and traded for a hedge fund for 13 years. Since 1994, he has called every major market top ahead of time and profited from them, including the break of the Dot-com bubble in 2000, the market crashes of 2008 and 2009, and the Covid crash of 2020. For the past 12 months he has been working with investors and traders to actively manage their portfolios by growing wealth, not risk, as a teacher and mentor working with Grok Trade, a stock trading educational company in business since 2007.
housing by N/A is licensed under yournorthcountry.com N/A