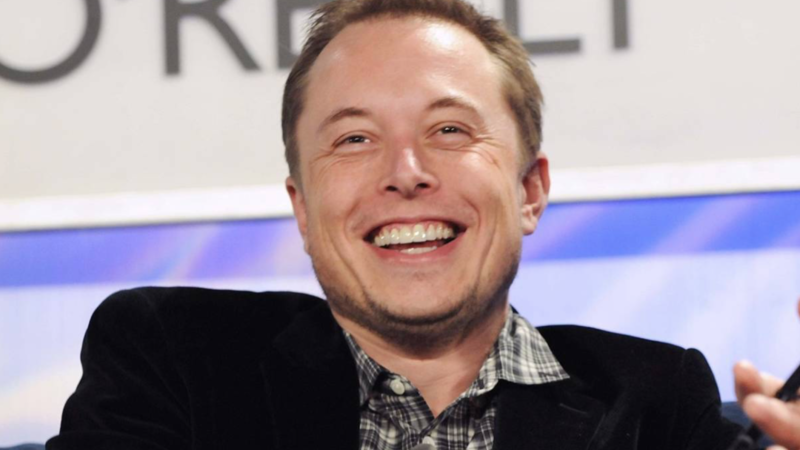 Elon Musk is a polarizing figure. He has made incredibly bold claims, falling short of some but surpassing most. Even after his massive accomplishments, people either love him or hate him. Almost eight months into 2021, TSLA stock is flat on the year. No matter, Musk still draws a crowd.

After exploding 700% last year, TSLA has been marking time as its huge valuation is absorbed by the stock market. Investors cheered the day when TSLA was invited to join the S&P 500 and the enormous institutional buying that would bring into the stock, but that big money support has another side of the coin. It means the massive upside is over.

Institutions are happy to sacrifice some gains in exchange for a less volatile play. Musk was accepted into the club, but now he must wear a suit.

While being eternal optimists regarding our own prospects due to discipline and hard work, Club Romulus members — the trading group I lead and which readers can join — are realists when observing the rest of the world. It is not realistic that TSLA will jump 700% in year, ever again. It is also not realistic that as long as the general bull market chugs along, TSLA stock will get cut in half from current levels. This is the result of that lower volatility I mentioned above.

Even though TSLA is not on its way to $3,000 a share by December, it is possible that a decent intermediate-term opportunity has arrived. Price action and volume patterns going back to the middle of May are constructive of further upside targets.

An uptrend began on May 19th, and it remains in place today. The stock is above all major moving averages, those moving averages are ascending and the 50-day moving average (blue) will cross above the 200-day (red) within a few days. There was a breakout above a short $700 resistance area on August 2nd, and that was accompanied by higher-than-average volume.

In the larger time frame, the chart looks like a symmetrical triangle is in play with the $700 breakout confirming an upside resolution. It seems like a catalyst could drive the stock to at least $760 within a few weeks. 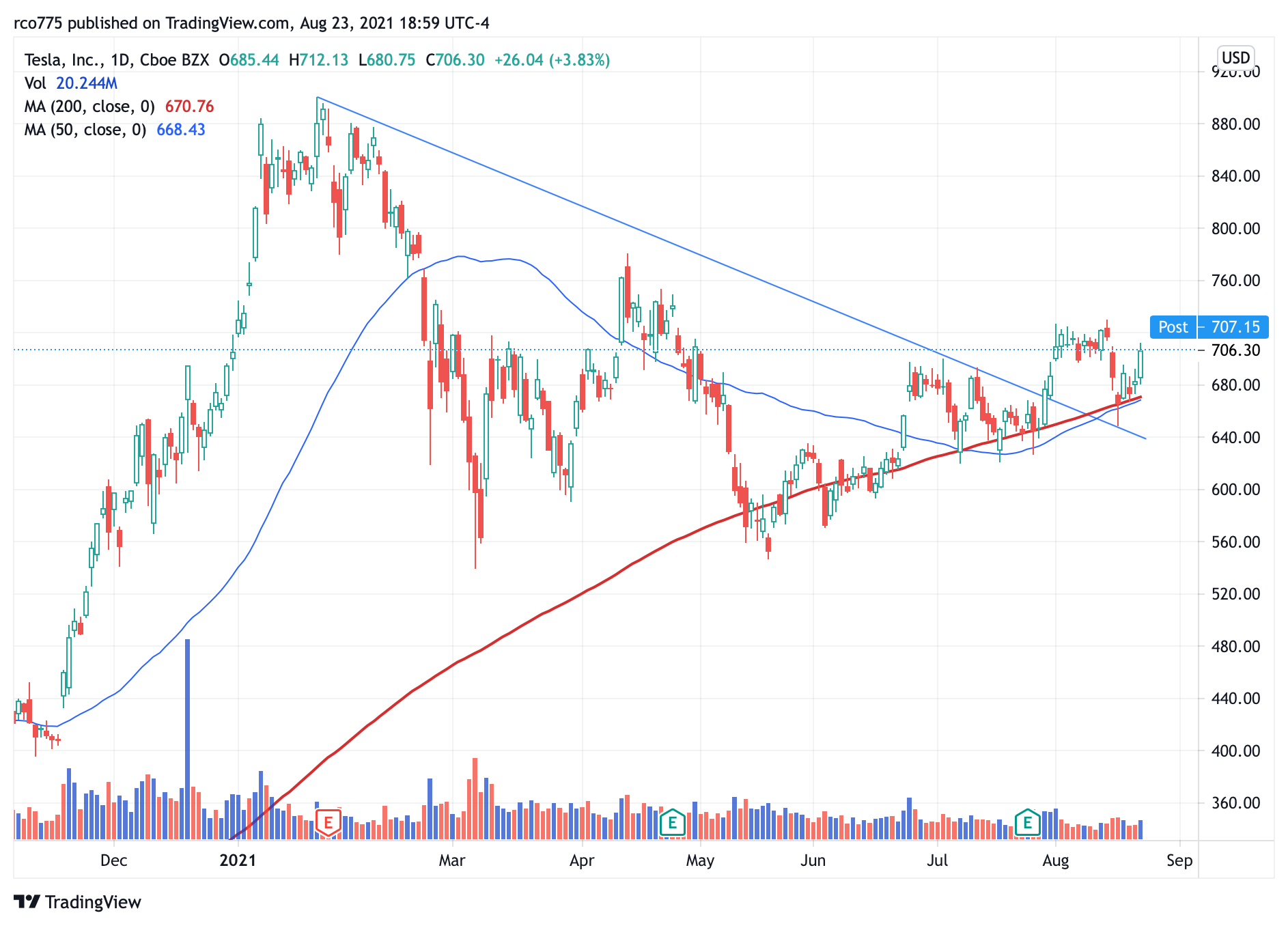 Interestingly, there is a catalyst. On Thursday, August 19th Tesla hosted an event called AI day. Musk stated the purpose is to showcase Tesla advancements in artificial intelligence and use that to attract talent. Stock traders will probably view it as a chance to fling the stock around. We can use it as an opportunity to make money. There is a low risk way to play TSLA for the intermediate term. Buy it now with a stop (your predetermined exit on a loss) below the 200-day moving average by 1% ($664 currently), with an $800 upside target. Let’s see what happens! Interest rates are important. We live in the age of credit. The 10-year yield is not about to take off for 7 or 10 or 15% levels, as some older market participants believe. The US Treasury department is running the dollar press as fast as it can get paper into the basement, but there is not imminent threat of a global dollar crash.

Federal Reserve Chairman Powell is telling us that the inflation we feel every day is transitory, which will allow him to keep rates on the floor until the year 2200. 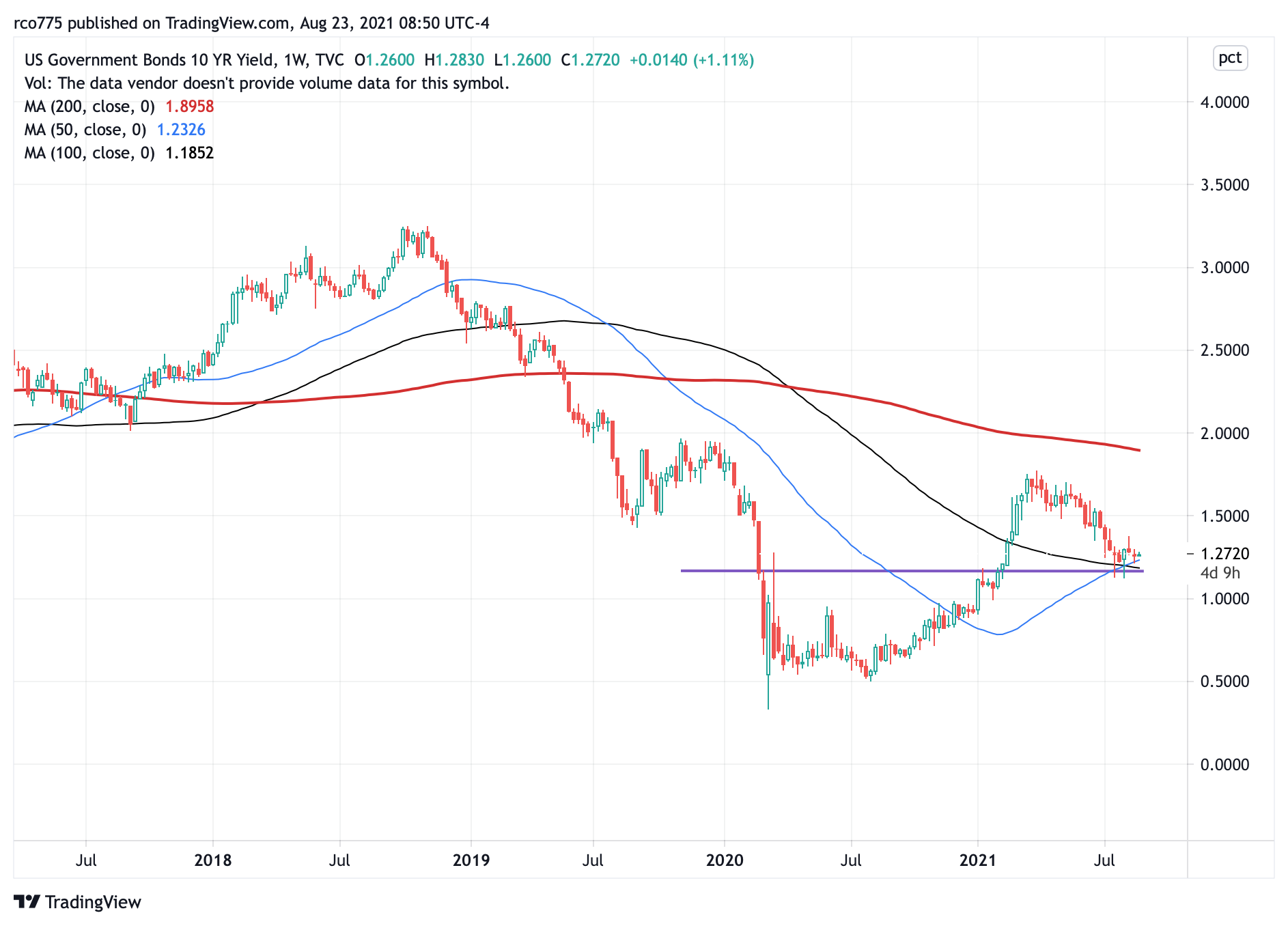 Focusing in on the latter portion of that chart, I see is a security playing games with the 200-day moving average, which is a common occurrence these days. The recent fall stopped at decent support, the same place that served as resistance earlier this year. You may also notice that on the weekly chart, the late march high was accompanied by a very overbought reading on the RSI 14. That is often considered a sign of strength after coming off a major low like last summer. 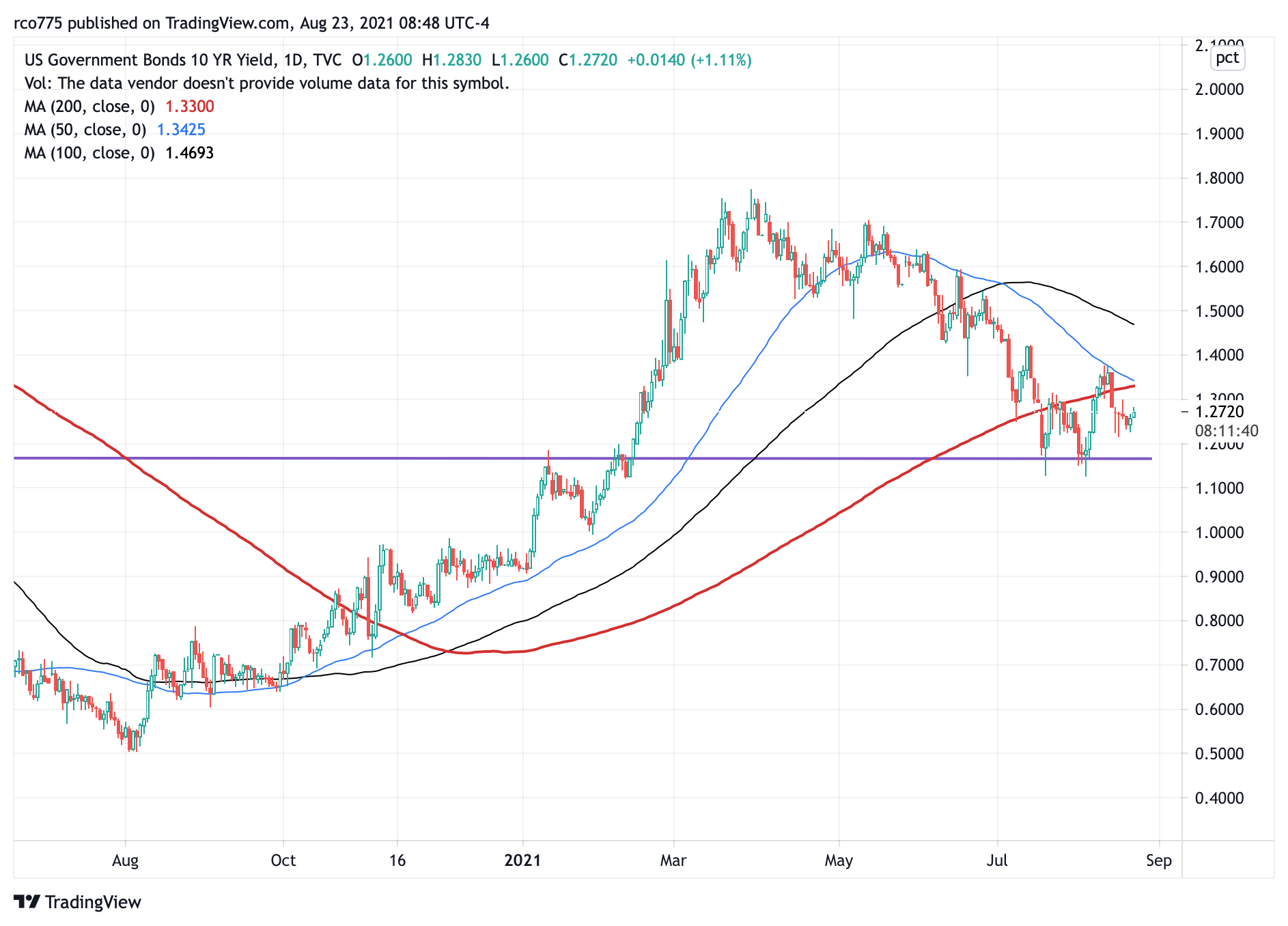 There is an important gathering this week in Jackson Hole, Wyoming. Central bankers from most major governments meet there each year to casually discuss interest rates and credit, which means they are talking about the fate of the global financial markets. Rumors will fly on topics ranging from bond purchases and delta variant to inflation and employment. There are fundamental and quantitative money management shops that will try to get as close to that information as possible and trade the rumors.

We can’t do that, but the charts are better. It doesn’t matter what people say. The important part is to watch what they do. And what they do shows up on the charts.

According to the charts, interest rates look like they are heading up in a halting fashion. Powell has already stated that he is committed to keeping rates on the floor forever, and the markets have priced that in.

There are a few ways to profit from a gentle up-trending interest rate environment. One is to buy bank stocks and ride out short and intermediate term corrections. Another tactic is to buy ETFs that go up when rates advance.

TBT is a leveraged ETF that attracts a lot of traders with over 4 million shares trading every day. There is a 3 to 1 leveraged ETF, TMV, but it trades a lot less volume, about 450,000 shares a day. This means TMV is useful for capturing gain on trades lasting a couple weeks or less, which will come in handy over the next 12 months.

Logic dictates that at some point excessive dollar printing and insanely low interest rates will create problems for the global economy. The problem for investors who place money under this thesis is that markets will remain illogical far longer than you can stay solvent.

The long-term equity bull market that started in March of 2020 is still alive, despite short-term risks. Until the major indexes suffer a fair amount of damage, the major up-trend will remain intact.

For trading education or to trade your portfolio with Romulus, contact josh@groktrade.com or go www.groktrade.com/romulus. About the author:

In his real-life existence, Romulus started on Wall Street in 1994 and traded for a hedge fund for 13 years. Since 1994, he has called every major market top ahead of time and profited from them, including the break of the Dot-com bubble in 2000, the market crashes of 2008 and 2009, and the Covid crash of 2020. For the past 12 months he has been working with investors and traders to actively manage their portfolios by growing wealth, not risk, as a teacher and mentor working with Grok Trade, a stock trading educational company in business since 2007.
Elon Musk by JD Lasica from Pleasanton, CA, US. Public Domain is licensed under WorldTribune.com NA