smcap by N/A is licensed under Illustration N/A
N/A
Special to WorldTribune, April 8, 2022


Last week, hope flooded the markets. Hope for peace in Ukraine. Hope that oil prices fall. Hope that Powell and the Federal Reserve get this tightening cycle right. This week, fear came back with the realization that the Fed has aggressive goals for throttling the spigot — quantitative tightening.

Hope springs eternal, but this time it may end up as dry as a Texas riverbed in July.

There are slightly more than 3,600 stocks trading on the major U.S. exchanges. 2,000 of these companies are considered small. They are labeled as small cap stocks and they trade within an index called the Russell 2000. By comparison, the Dow Jones Industrial Average index, the oldest and most famous index in the world, only contains 30 stocks. They are among the largest companies in the world, however, which is one reason the index attracts attention.


It makes sense to analyze indexes such as the Dow and S&P 500 because they are packed with wealthy and influential companies that make and spend a lot of money. It is the S&P 500, after all, that every professional money manager grades their performance against. But that is less than 15% of all firms trading on the major exchanges.

Doesn’t it also make sense to study what most stocks are doing?

As a bull market matures, smaller companies run into more difficulty beating investor expectations. They are typically the first group of stocks to suffer before the end of the bull run. As these stocks turn into losers, investors begin concentrating their buying in larger firms, companies inside the Dow index, for example. The concentrated buying propels the larger indexes higher as the Russell 2000 heads sideways or down.

At first, people believe the bigger stocks will pull the smaller companies up, but it doesn’t normally work that way. Usually, the bigger stocks follow in the path of the Russell 2000. It is difficult to pinpoint the timing of these moves, but when the bigger and smaller stocks move in different directions it becomes a question of when, not if.

For more than three months I’ve been showing how weak this market is and warning against getting too excited about potential upside moves. I’ve said there are two things that can happen which might spark a sustainable move in stocks. The first is a capitulation or selling climax event, something that has taken place at the end of every bear market in history. This capitulation would serve as a cleansing of weak stockholders and uninformed participants. Despite some expert calls to the contrary, we have not seen a selling climax yet.

The other situation that can lead to a worthwhile continuation of this two-year-old bull market is a broad-based rally that involves almost every part of the market. Trading action in the Russell 2000 is the easiest way to identify this. If the small stocks are bounding higher and outpacing the larger indexes, probabilities grow for an extended move.

A month ago, it looked like the small stocks were trying to tell us something. From the end of January until March 14th, the S&P 500 was posting new lows, but the Russell 2000 was staying the same. This is called relative strength. Hope began to rise as this relative strength made the rounds in the professional trading community. Good, upside action is exactly what this market needs if it is going to run for a while.

The problem is that the riverbed seems to be running dry already. A look at the chart of the Russell 2000 shows that small cap stocks are underperforming the broader markets. Just like the second half of last year, investors are concentrating their buying in bigger stocks like Apple and Tesla. This can continue for a little while, but not for long. 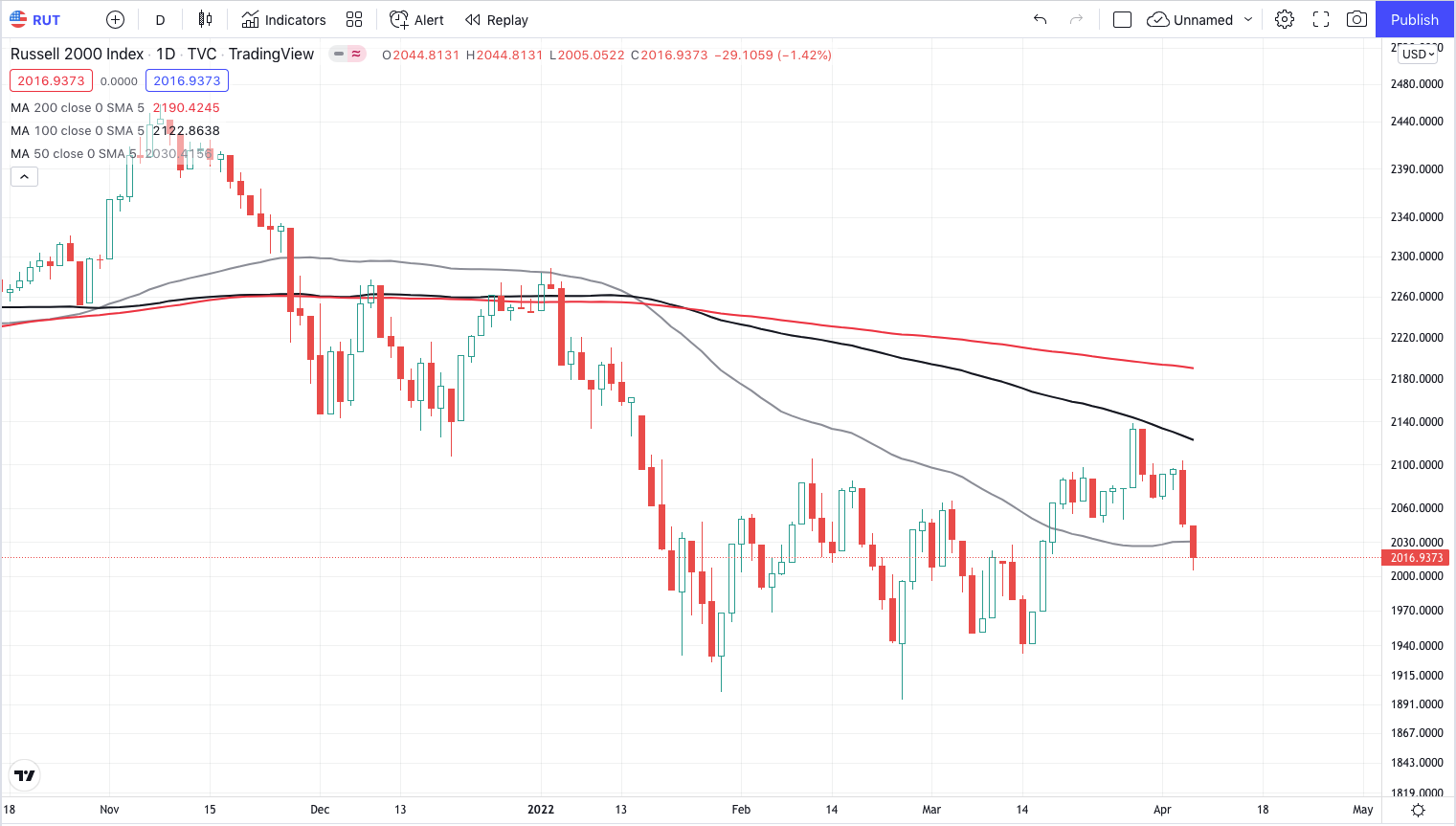 It is possible that enough momentum has built up over the last three weeks to carry stocks higher through late April. I wouldn’t bet the farm on that, however. It is still possible that a broad-based move can kick in and change my doubting mind. It is not probable, however.

Odds, probabilities, proper money management techniques and emotional control. These are the traits needed to enjoy a sustainable career in trading. Increasing your skills in these areas will ensure your cup runneth over, instead of feeling as dry as that Texas riverbed in July.

Wealth, like Rome, cannot be built in a day. But, like Rome, it can be lost in a day. Watch for future announcements from Romulus about profitable market moves, important indicators, and major market swings.

For trading education, mentoring, or to beat the markets with Romulus' trading group, contact romulusteaches@yahoo.com.