Starting in December, this report has issued a series of warnings regarding the risks and dangers of the stock and bond markets.

It began with simple comments about how the S&P 500 had not seen a greater than 6% correction in over a year and was long overdue for one. I posted the graph below in January showing the TOTAL insanity behind current valuations and discussed how this overvalued market will lead to a decade of sub-par returns (these comments included stocks and real estate).

Keep in mind these data go back to 1870! The average Shiller PE ratio is 16. Even after a 15% stock market correction this year, valuations remain INSANE!


The warnings increased in a morning update to my trading and investing group on Jan. 13th, when I said I would sell all stocks and bonds for intermediate and long-term accounts. Let’s take a moment and put this call into proper perspective. The last bear market in stocks ended in March of 2009. (The Covid crash was not a bear market, as that label requires components of price and time. Anytime the S&P 500 falls 38%, then reclaims all-time highs in four months is not a bear market.)

At the beginning of this year, stocks completed the longest running bull market in U.S. history. The ROMULUS Legion issued a full sell signal in all intermediate and long-term stock investments when the market was just 1.5% off the all-time high.


One indication came from the weekly chart of the S&P 500, highlighting the blue line, which is the 21-week moving average. That line has shown to offer excellent support for the market dating back to right after the Covid crash. The logical assumption in early January was that once the line was broken with strength, it would serve as an area of strong resistance going forward. That is the case, as you can see for yourself. 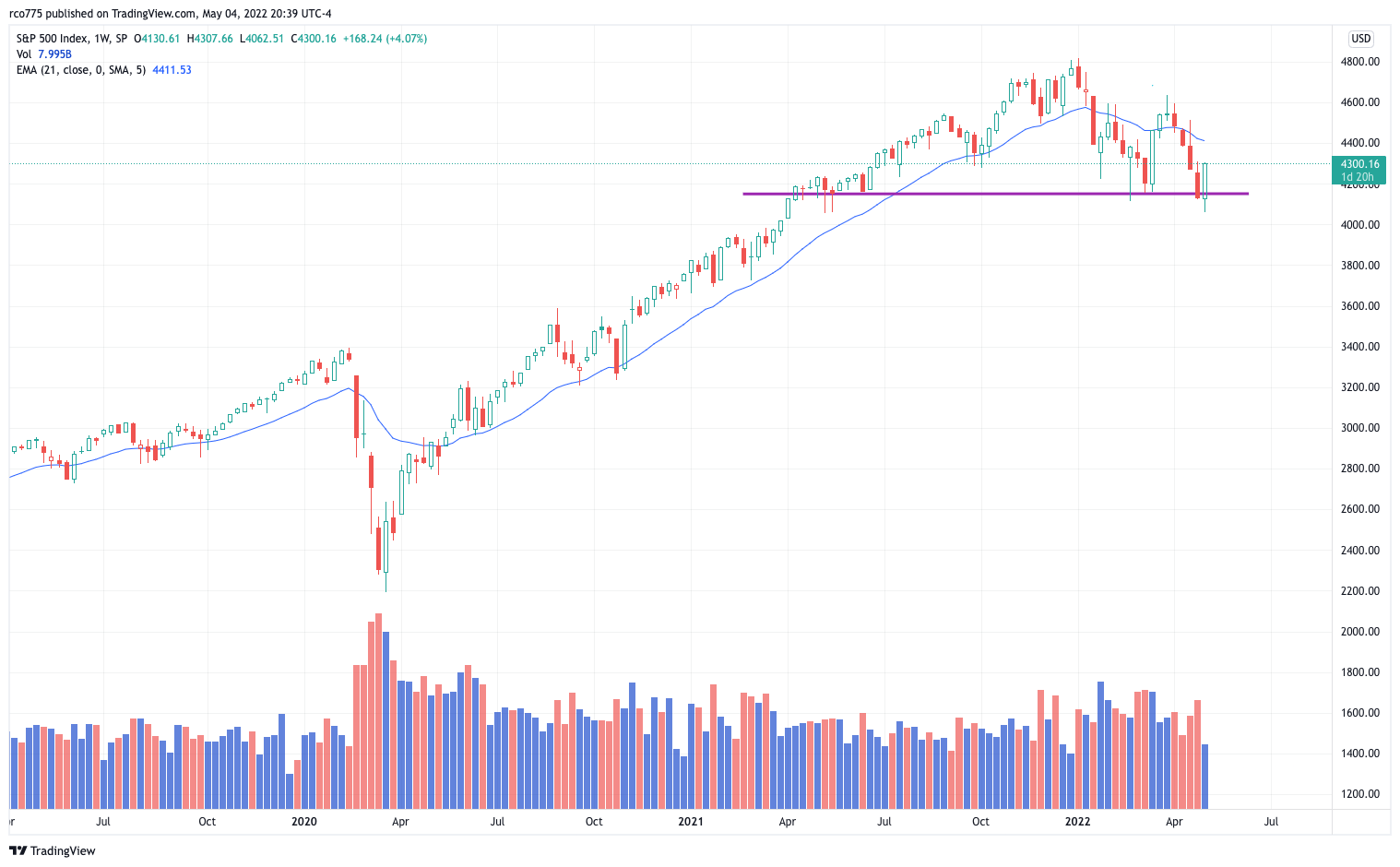 Cautious statements continued after stocks ran up in late March with evidence pointing to a return to the early March lows by the end of September. For some indexes and sectors, the trip only took a few weeks as small cap stocks, communications and technology are now back to those levels.

There were also comments regarding the inflation trade--the flight to safe haven sectors and commodities. 2007 was the demonstrated example. Stocks hit all-time highs in October, but the safe haven plays of utilities, health care, energy and consumer staples continued running, for a bit. Utilities topped out in late December, health care a month later, energy hit a wall in May and consumer staples ran all the way through September. The bear eventually mauled all of them, with energy experiencing a particularly painful goring of 58%. At some point, this bear market will claim the current inflation trade as another victim, although it may not be just yet.

Though stocks remain oversold in the short term, there is nothing in the intermediate or longer-term picture to suggest a change of viewpoint. Rallies will come and go. This sector or that will have its day. Until we see that that capitulation, that selling climax event that I mentioned on March 14 and since, stocks will remain a dangerous place for money. This is still a bear market, please continue to exercise the necessary precautions.

TINA serves as one explanation as to how stocks went on the longest run in history. With inflation and interest rates mostly trending lower since 1982, the bond market reached a point where it made no sense to keep buying bonds, the prices were just too high. Real estate kept moving up, but the big money players don’t look at real estate as a high enough returning asset class to serve as a serious competitor to stocks. Crypto seemed interesting, but the volatility and increasing regulations meant a very small and contained investment commitment. Commodities only started to stand out in the last six months, and we see with the April market correction that they don’t seem impervious to corrections either.

For the final few years of this bull market, the institutional investment community used TINA as their excuse to keep buying stocks. 2022 is teaching this community the same lesson their institutional ancestors learned in all previous bear markets. The easy trade only takes you so far until it takes you down the wrong road.

There is an alternative now.

Interest rates are probably going to continue moving higher over the next year or more. That means bond prices will keep falling. Interest rates have gone up anywhere from 100-600% over the last seven months (depending on the loan duration), but they will not increase at that rate over the next seven months. Investors can now buy a 20-year US bond that pays 3.10%. Inflation will probably average more than 3% a year for the next 20 years, which means this bond will lose purchasing power to that inflation. But that will not stop some people from buying these bonds. Banks are now offering 2% on liquid deposits. Some commodities should continue to attract interest for while. In other words, there are alternatives today. This is just another reason why stocks will continue to suffer until the selling climax arrives.