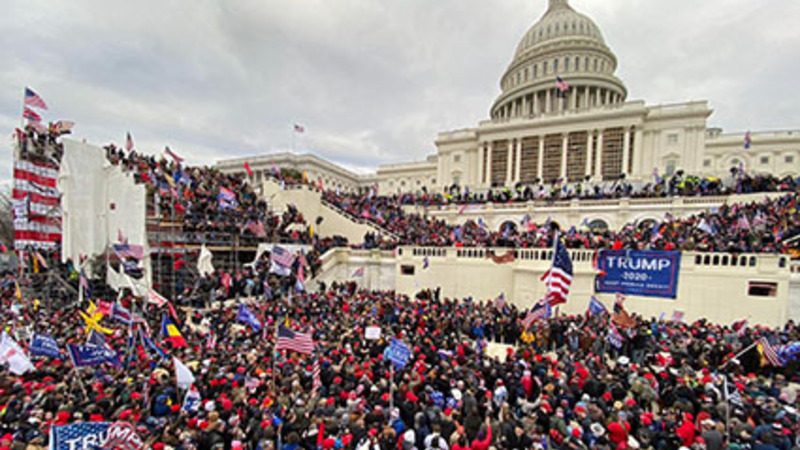 cap6nar by N/A is licensed under Video Image N/A
The insurrection that wasn't is what Big Media wants Americans to remember most about 2021.
Analysis by WorldTribune Staff, January 4, 2022


The holidays brought a welcome respite from a surreal year. What really happened? How many Americans drew their own conclusions and how many accepted official media analysis?

Big Media at the end of 2021 "would not tell us the truth" just as they hadn't in 1991, columnist Peter Wolfgang reminded readers, writing for The Stream on Dec. 30. "Back then, the MSM featured the story that served the Democratic agenda, not the really important stories."

In 1991, the United States had won the Persian Gulf War in a lighting-quick victory with very few casualties.

"I remember the victory parades in NYC and Washington, D.C. I was personally present at the one in D.C. Tanks rolling down American streets in celebration. Fighter jets flying overhead. It was very unusual for the USA. More the sort of parade that occurred every year in the USSR. But we deserved it," Wolfgang noted.

The Soviet Union also collapsed in 1991. It was officially disbanded on Christmas Day.

So, what did the media make its main focus in year-end wrap-up issues?

"They focused on Anita Hill," Wolfgang noted. "At year-end 1991, the media made sure it was the one thing you remembered about the year. The far-greater historical things I just mentioned were comparatively downplayed."

"Because Anita Hill fit the narrative," Wolfgang added. "The Republican party hated women. Nominating Clarence Thomas proved it. (And let’s not forget what a threat a conservative black justice was to the Democrats, who claimed to speak for all black Americans.)"

Fast forward to 2021 and "they are doing it again," Wolfgang wrote.

Big Media focused their year-end reviews on references to the events of Jan. 6 at the U.S. Capitol.

"The only thing they want you to remember about 2021 is what fits the narrative," Wolfgang wrote. "And Jan. 6th is their 'Reichstag Fire.' The thing they can use to gaslight us and control us for the rest of our lives. Or try to, anyway."

What else happened in 2021? America under the installed Biden regime "lost a war for only the second time in its history," Wolfgang noted.

"You’re not hearing a lot about our ignominious retreat from Afghanistan in the year-end wrap-up stories, are you? Biden’s abject, miserable exit from Afghanistan does not fit the narrative. Nor do any of his other failures in what has been his first, miserable year in office, a one-year presidency that already feels like a full term … of awfulness."

Big Media wants Americans to forget Afghanistan and Biden’s incompetence. "They only want you to remember Jan. 6th," Wolfgang concluded. "Don’t let them drive the narrative. Don’t let them make you forget."

cap6nar by N/A is licensed under Video Image N/A