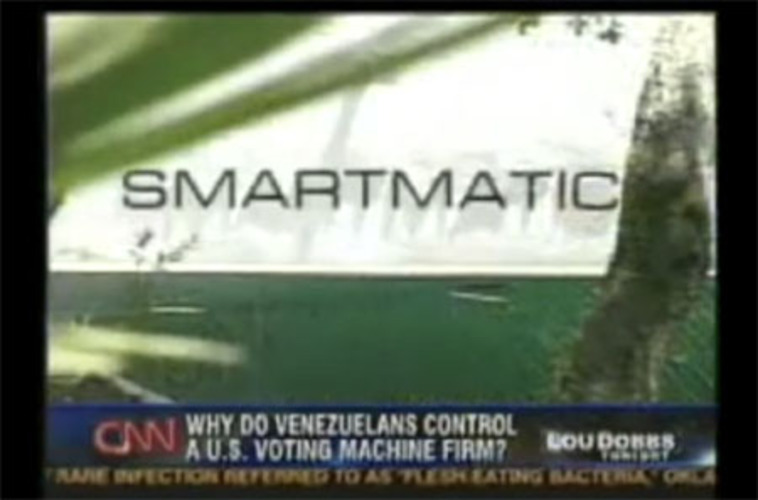 The murky history of Smartmatic and Dominion Voting Systems is coming into focus thanks to independent media and social media investigators.

The major U.S. media have demonstrated minimal curiosity about the firms and how votes are tabulated and adjudicated in modern elections. And the U.S. Government's dismissive public stance on allegations of voting data fraud contrasts with cables sent from the U.S. Embassy in Caracas, Venezuela in 2006.

Media reports said claims Smartmatic and Dominion are connected had been widely discredited and that the companies, in fact, consider themselves "fierce" competitors. Those reports were based only on company statements.

However the National Pulse in a Nov. 21 report said court documents it had analyzed reveal Smartmatic and Dominion have a “noncompetition” agreement.

According to the summary of law firm Potter Anderson Corroon, in 2009, Dominion was a defendant in a lawsuit against Smartmatic: “The license agreement contained a noncompetition provision, which, among other things, prohibited Smartmatic from develop[ing], market[ing] or sell[ing] any Licensed Product in the United States.”

In other words, it would be illegal for the two firms to compete – a direct contradiction of claims by the firms as well as by media organizations.

A Wikileaks post dated July 10, 2006 revealed the assessment from U.S. embassy in Venezuela about the true identify and origins of Smartmatic and raised questions that have yet to be answered.  Given that the voting systems being discussed were migrating to the United States as it was written, and in fact were "already working in a dozen U.S. states", U.S. agencies could have been expected to scrutinize them over the past 14 years.

1. (C) The Venezuelan-owned Smartmatic Corporation is a riddle both in ownership and operation, complicated by the fact that its machines have overseen several landslide (and contested) victories by President Hugo Chavez and his supporters. The electronic voting company went from a small technology startup to a market player in just a few years, catapulted by its participation in the August 2004 recall referendum. Smartmatic has claimed to be of U.S. origin, but its true owners -- probably elite Venezuelans of several political strains -- remain hidden behind a web of holding companies in the Netherlands and Barbados. The Smartmatic machines used in Venezuela are widely suspected of, though never proven conclusively to be, susceptible to fraud. The company is thought to be backing out of Venezuelan electoral events, focusing now on other parts of world, including the United States via its subsidiary, Sequoia. End Summary.

2. (C) Smartmatic was founded in the late 90s by three Venezuelans, Antonio Mugica, Alberto Anzola, and Roger Pinate. According to Mugica's conversations with poloffs in recent years, the three had developed a network capable of handling thousands of simultaneous inputs. An early application was ATMs in Mexico, but the U.S. presidential election in 2000 led the group to consider electronic voting platforms. ...

Most of the manufacturing for their electoral and other electronic machinery was done in China, Mugica said. …

Of course, the Venezuelan opposition is convinced that the Smartmatic machines robbed them of victory in the August 2004 referendum. Since then, there have been at least eight statistical analyses performed on the referendum results. Most of the studies cross-check the results with those of exit polls, the signature drives and previous election results. One study obtained the data log from the CANTV network and supposedly proved that the Smartmatic machines were bi-directional and in fact showed irregularities in how they reported their results to the CNE central server during the referendum. (Note: The most suspicious data point in the Smartmatic system was that the machines contacted the server before printing their results, providing the opportunity, at least, to change the results and defeat the rudimentary checks set up by international observation missions. Since August 2004, the CNE has not repeated this practice.) These somewhat conspiratorial reports perhaps serve to breathe life into a defeated opposition, but have never proved conclusively the fraud …

9. (C) In December 2005, Mugica told emboffs the company was considering terminating its business with the CNE. Allegations of fraud were hurting the company's image, he said. (Note: Prior to that meeting, Mugica had agreed to loan a voting machine to the Embassy for examination. When emboffs arrived at the office, however, Mugica said he had changed his mind and instead suggested that we contact Smartmatic's Boca Raton office to secure a test machine.) Mugica noted that the CNE had purchased the software necessary to operate the machines without his company -- part of the CNE's stated goal of achieving "technological independence" -- though he noted the CNE regularly holds out until the last minute before hiring them to administer an election. He listed several countries in Latin America where they had either started supplying machines or were pushing for sales. In December, Mugica told Polcouns the company is trying to break into Europe and Asia (he mentioned having sales agents in Thailand, Malaysia and the Philippines), they had yet to secure any sales. Of course, via Sequoia, Smartmatic is already working in a dozen U.S. states.

Comment ------- 10. (C) Smartmatic is a riddle. The company came out of nowhere to snatch a multli-million dollar contract in an electoral process that ultimately reaffirmed Chavez' mandate and all-but destroyed his political opposition. The perspective we have here, after several discussions with CARACAS 00002063 004.2 OF 004 Smartmatic, is that the company is de facto Venezuelan and operated by Venezuelans. The identity of Smartmatic's true owners remains a mystery. Our best guess is that there are probably several well-known Venezuelan businessmen backing the company who prefer anonymity either because of their political affiliation or, perhaps, because they manage the interests of senior Venezuelan government officials.

Though CNN in 2020 has brushed off reporting on Smartmatic and Dominion as a "conspiracy theory," that very network in 2006 warned of "Venezuelan controlled" Smartmatic and asked why U.S. voting machines would be under the control of citizens from another country.

“We believe this is a national security issue. There is no way that companies belonging to non U.S. corporations should have access to our elections,” lamented Joan Krawicz of Vote Trust USA in the 2006 CNN report.