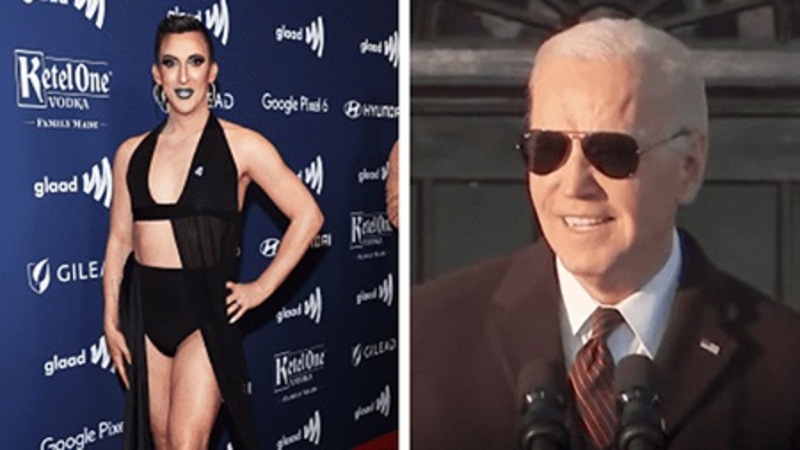 queenjo by N/A is licensed under Internet N/A
Marti Gould Cummings, an NYC drag artist, was invited to the White House by Joe Biden for the signing of the Respect for Marriage Act.
Special to WorldTribune.com

On Sept. 21, 1996, President Bill Clinton signed the Defense of Marriage Act (DOMA): "I have long opposed governmental recognition of same-gender marriages and this legislation is consistent with that position."

He added: "The word 'marriage' means only a legal union between one man and one woman as husband and wife, and the word 'spouse' refers only to a person of the opposite sex who is a husband or a wife."

In 2000, Hillary Clinton stated: "Marriage has historic, religious and moral content that goes back to the beginning of time, and I think a marriage is as a marriage has always been, between a man and a woman."

When Barack Obama first ran for Senate against Amb. Alan Keyes, he told the Windy City Times, Feb. 2, 2004: "I am not a supporter of gay marriage ... I think that marriage, in the minds of a lot of voters, has a religious connotation. I know that’s true in the African-American community."

In 2006, Obama declared: “Decisions about marriage should be left to the states as they always have been.”

On April 17, 2008, while running for President, Obama was allowed to make an unchallenged statement at Saddleback Church: “I believe that marriage is the union between a man and a woman. Now, for me as a Christian — for me — for me as a Christian, it is also a sacred union. God’s in the mix.”

On Nov. 2, 2008, Obama stated in an MTV campaign interview: “I believe marriage is between a man and a woman. I am not in favor of gay marriage."

On Oct. 27, 2010, President Obama wrote in an interview with liberal bloggers: “I have been to this point unwilling to sign on to same-sex marriage primarily because of my understandings of the traditional definitions of marriage."

The majority of citizens in 30 States had previously voted to define marriage being between a man and a woman, but the Supreme Court invalidated their will in the Obergefell vs. Hodges gay-marriage decision, June 26, 2015.

Then, on Dec. 13, 2022, President Biden invited a non-binary drag queen, Marti Gould Cummings, to the White House to celebrate signing what is being referred to as the "DisRespect for Marriage Act," effectively repealing the Defense of Marriage Act of 1996 and making the liberal Obergefell decision into a Federal law.

The Republican Senators who voted with Chuck Schumer and the Democrats were:

The Republican Representatives who voted with Nancy Pelosi and the Democrats include:

These individuals abandoned the Republican Party's founding plank of 1856 which called for defending marriage as one man and one woman — "to eliminate the twin relics of barbarism: polygamy and slavery."

Rep. Dan Meuser, PA, wrote in a statement on Twitter:

"This bill goes beyond marriage and weakens the religious freedoms fundamental to our nation."

The Obergefell decision, itself, has a cloud of illegitimacy over it, as Justices, Kagan and Ginsburg were obliged to recuse themselves, as judicial ethics predicated, as they were not impartial having both participated in homosexual weddings prior to hearing the case.

Of the decision, Former Arkansas Governor Mike Huckabee stated: "This irrational, unconstitutional rejection of the expressed will of the people in over 30 states will prove to be one of the court's most disastrous decisions ... The Supreme Court isn't the supreme branch ... Five lawyers on the Supreme Court can no more repeal the laws of nature and nature's God on marriage than they can the laws of gravity ... I will not acquiesce to an imperial court any more than our Founders acquiesced to an imperial British monarch. We must resist and reject judicial tyranny, not retreat ...Under our Constitution, the court cannot write a law, even though some cowardly politicians will wave the white flag and accept it without realizing that they are failing their sworn duty to reject abuses from the court."

"This irrational, unconstitutional decision threatens religious liberty — the heart of 1st Amendment. Congress must act ... The Supreme Court is not the Supreme Being ... The only outcome worse than this flawed, failed decision would be for the President and Congress, two co-equal branches of government, to surrender in the face of this out-of-control act of unconstitutional, judicial tyranny." ....

U.S. Senator Ted Cruz stated: "This is not a typical moment in American history ... The last 24 hours at the United States Supreme Court were among the darkest hours of our nation ..."

Cruz added: "This week, we have twice seen Supreme Court justices violating their judicial oaths ... I have already introduced a constitutional amendment to preserve the authority of elected state legislatures to define marriage as the union of one man and one woman ... And also legislation stripping the federal courts of jurisdiction over legal assaults on marriage."

Franklin Graham stated: "The court — since it never defined marriage — doesn't have the right to redefine it. God gave us marriage. Period. And God doesn't change his mind ... "I believe God could bring judgment upon America ...Given the choice of obeying God or the government, I believe Christians will obey God — even if there is hell to pay."

Former CEO of Hewlett-Packard, Carly Fiorina, who was the first woman to lead one of the top twenty U.S. companies, stated: "This is only the latest example of an activist court ignoring its constitutional duty to say what the law is and not what the law should be ... I do not agree that the Court can or should redefine marriage. I believe that responsibility should have remained with the States and voters where this conversation has continued in churches, town halls and living rooms around the country ... All our effort should be focused on protecting the religious liberties and freedom of conscience of those Americans that profoundly disagree with today's decision."

Justice Antonin Scalia had stated regarding the 2015 Obergefell decision: "I write separately to call attention to this Court's threat to American democracy ... Today's decree says that my ruler, and the ruler of 320 million Americans coast-to-coast, is a majority of the nine lawyers on the Supreme Court ... This practice of constitutional revision by an unelected committee of nine, always accompanied (as it is today) by extravagant praise of liberty, robs the People of the most important liberty they asserted in the Declaration of Independence and won in the Revolution of 1776 - the freedom to govern themselves ..."

Justice Samuel Alito was joined by Justice Clarence Thomas in condemning the ruling as a “preposterous” overreach betraying “breathtaking” arrogance in seizing legislative power away from the states and the citizens: "It is a matter of concern to many people who are reticent about disrobing or using toilet facilities in the presence of individuals whom they regard as members of the opposite sex ... For women who have been victimized by sexual assault or abuse ... (it) can cause serious psychological harm ... To force young women to compete against students who have a very significant biological advantage ... who have the size and strength of a male but identify as female." ....

In 2012, President Obama publicly switched to not only supporting gay marriage but punishing States and purging from the military anyone holding the views he held just a few years earlier.

This led many to conclude that his campaign statements were intentional lies, a political "bait-and-switch — lying to the public in order to get elected but then once in office, forcing his liberal views on the country.

This is not new tactic. Political rhetoric has always been the lowest common denominator. Ambitious politicians want to get elected so they say things that appeal to the largest number of voters, oftentimes deceitfully hiding differing personal views.

"A prince never lacks legitimate reasons to break his promise."

"A wise ruler ought never to keep faith when by doing so it would be against his interests."

"Politics have no relation to morals."

Machiavelli has been studied by pragmatic amoral politicians, as David Broder wrote in The Washington Post article "The Reformer has Enemies ... and Only Lukewarm Defenders," May 16, 1994: "A year ago last week, President Bill Clinton gave an interview to several of us from The Washington Post ... At the end of the interview, he stood before the fireplace in the Oval Office and recited to us a passage from Machiavelli's The Prince.

In a hoarse voice, he said, 'Listen to this: "It must be considered that there is nothing more difficult to carry out ... than to initiate a new order of things. For the reformer has enemies ... and only lukewarm defenders." ....

The redefinition of marriage and sexual morals has a larger and more devastating societal effect.

Oxford anthropologist J.D. Unwin published a book in 1934 titled Sex and Culture, in which recorded the results of studying 86 civilizations over 5,000 years.

He found a 100 percent correlation between monogamous heterosexual marriage and cultural advancement.

Conversely, he observed that sexual promiscuity and loosening of sexual restraints inevitably leads to the decline and collapse of a civilization.

As standards of sexual behavior are cut loose from the encumbrances of traditional values, the logical next step is towards arbitrary rules, followed by lawless activity, including: Polygamy, incest, group marriages, trafficking, child brides, pedophilia, bestiality, sex slavery, and unspeakable violence toward vulnerable women and children.

Though presenting itself as an anti-racist organization, Black Lives Matters actually has a radical sexual agenda which most supporters are unaware of.

Founded by trans-activists Alicia Garza, Patrisse Khan-Cullers, Opal Tometi, BLM states on its website (under the heading "What We Believe, accessed 6/26/20): "We make space for transgender ... to dismantle cisgender privilege and uplift ... trans folk, especially ... trans women ... We disrupt the Western prescribed nuclear family structure requirement by supporting each other as extended families and “villages” that collectively care for one another, especially our children .... We foster a queer-affirming network ... with the intention of freeing ourselves from the tight grip of hetero-normative thinking, or rather, the belief that all in the world are heterosexual (unless s/he or they disclose otherwise)."

It can be expected that Biden's new law redefining marriage, passed by Democrats with the help of establishment Republicans, will be taught to children in public schools.

This teaching is different from what Jesus taught in Mark 10:6-9: "But from the beginning of the creation, God ‘made them male and female.’ For this reason a man shall leave his father and mother and be joined to his wife, and the two shall become one flesh.’ "
queenjo by N/A is licensed under Internet N/A