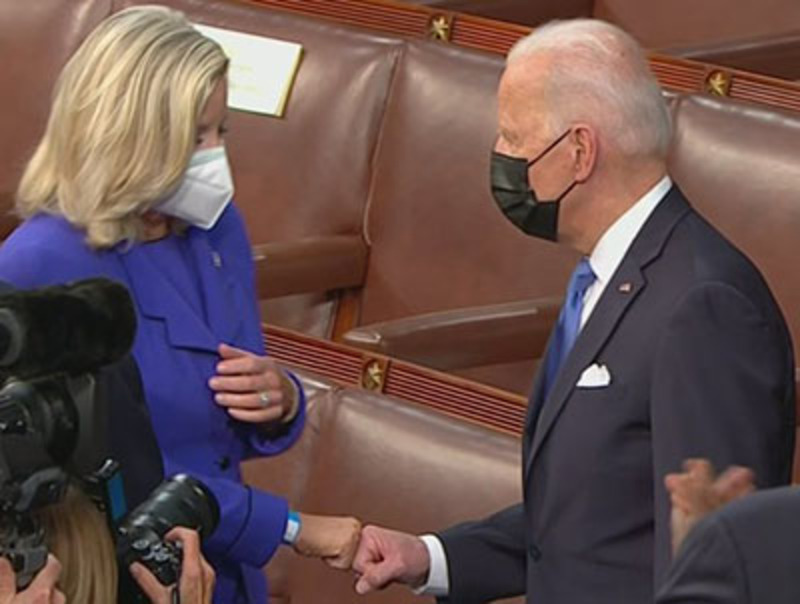 cnybidn by N/A is licensed under Public Domain C-SPAN
Joe Biden fist bumps Rep. Liz Cheney prior to his address to Congress on Wednesday.
Analysis by WorldTribune Staff, April 29, 2021

The Biden New Deal was introduced during a bizarre joint session of Congress on Wednesday in which fully-vaccinated politicians wore their obedience masks and socially distanced.

Analysts noted that Team Biden's New Deal really is not a deal at all as most of its free handouts are modeled on the 1960s Great Society.

"It’s more accurate to call this the plan to make the middle class dependent on government from cradle to grave," the Wall Street Journal Editorial Board noted. "The government will tell you sometime later, after you’re hooked to the state, how it will force you to pay for it."

In his rebuttal to Biden's plan to change the nation's "center of gravity" from hard-working Americans to Big Government, South Carolina Republican Sen. Tim Scott noted: “This should be a joyful springtime for our nation. This administration inherited a tide that had already turned. The coronavirus is on the run. So why do we feel so divided and anxious? A nation with so much cause for hope should not feel so heavy-laden.”

"We’d call the price tag breathtaking, but by now what’s another $2 trillion? Add $2 trillion or so each for the Covid and green energy ('infrastructure') bills, and that’s $6 trillion of new spending in 100 days. That doesn’t include the regular federal budget of more than $4 trillion a year. No worries, mate, the Federal Reserve will monetize the debt," the Journal editorial said.

"The destructive part is the way the plan seeks to insinuate government cash and the rules that go with it into all of the major decisions of family life. The goal is to expand the entitlement state to make Americans rely on government and the political class for everything they don’t already provide," the Journal said.

Biden's handouts include new pre-school entitlement to all families; free community college; making permanent the tax-credit expansion to $3,600 per child in the Covid bill; permanent expansion of Obamacare subsidies for more affluent adults, eliminating the subsidy cap that was 400% of poverty; and a new paid family leave entitlement that will be an incentive for companies to drop leave benefits that already cover most workers.

"All of this adds up to healthy guaranteed annual income largely untied to the social contract that requires work, which is the real path to independence and self-respect," the Journal noted.

"The new taxes are destructive, but their impact will take time to be felt as the post-pandemic economy soars," the Journal noted. "The GOP shouldn’t ignore the taxes and spending. But a more potent political target may be the bill’s tripling down on a welfare state that disdains the dignity of work and seeks to make Americans the wards of government."

In his response, Scott said that Biden had "promised to unite a nation, to lower the temperature, to govern for all Americans no matter how we voted. Three months in, the actions" of Biden "and his party are pulling us further and further apart."

“When America comes together, we’ve made tremendous progress, but powerful forces want to pull us apart,” Scott said. “A hundred years ago, kids in classrooms were taught the color of their skin was their most important characteristic, and if they looked a certain way, they were inferior,” he continued, pointing to himself.

Scott railed against colleges, corporations, and cultural entities for profiting off “pretending we haven’t made any progress at all by doubling down on the divisions we’ve worked so hard to heal.”

“You know this stuff is wrong. Hear me clearly: America is not a racist country,” Scott declared. “It’s backwards to fight discrimination with different types of discrimination, and it’s wrong to try to use our painful past to dishonestly shut down debates in the present.”

cnybidn by N/A is licensed under Public Domain C-SPAN