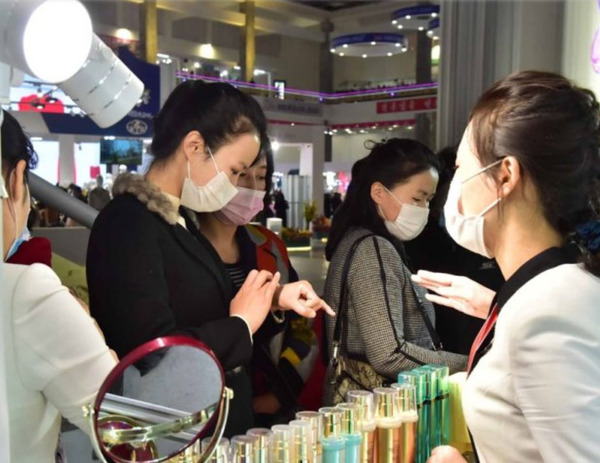 pyong by N/A is licensed under Choson Sinbo N/A
Women in Pyongyang sample cosmetics at an exhibition of women's clothing.
FPI / December 22, 2022

Since its founding in 1948, North Korea has claimed to be a communist society. Under communist rule, there are supposedly no class divisions.

But North Korea's growing middle class and their interest in consuming culture, especially in privileged Pyongyang conclaves for favored elites, have given rise to more diverse goods and services in the country as the Kim Jong-Un regime embraces it as contributing to stability rather than as a threat, according to a recent report.

In modern-day North Korea, the concept of the middle class is flourishing. Middle class is even a term that can be found in the North’s official documents. In its dictionaries, it is defined as "the social class that has a relatively affluent way of life."

A study led by Jeong Eun-Mi at the Korea Institute for National Unification found that middle-class North Koreans are becoming increasingly selective about what they eat and wear as well as how they spend their leisure time.

In much of the rest of the nation, according to multiple reports, the good life is a fantasy as many struggle to find their next meal.

Over the past 10 years and under Kim Jong-Un's watch, the rise of such consumerism has become more visible, even though the coronavirus pandemic slowed the trend, Jeong said.

Unmentioned is another factor, the underground flood of videos from South Korea’s booming popular culture which the Kim Jong-Un regime has unsuccessfully if brutally sought to suppress.

Kim Jong-Un is said to have learned to nurture the middle class after spending his teenage years in Switzerland.

Kim “appears to have been interested in expanding the middle class, which he apparently thinks will be helpful for the stability of the regime,” Jeong said.