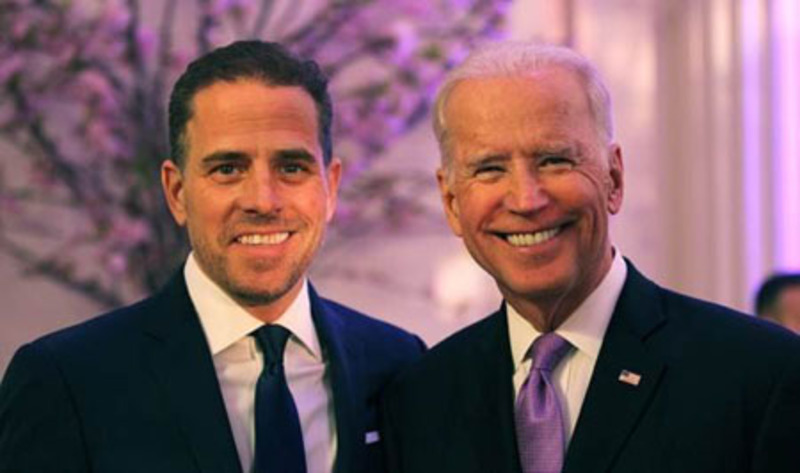 As Joe Biden and his team look for ways to dismantle the Second Amendment and possibly confiscate firearms from Americans, a new report shows a gun problem in Biden's own family.

In a bizarre incident from October 2018 that was first reported by Politico on Thursday, the Secret Service intervened in 2018 police investigation when Hunter Biden's then girlfriend — his brother Beau's widow Hallie — lost his gun after she thought he was going to kill himself with it.

Politico reported that it obtained copies of the Firearms Transaction Record and a receipt for the gun dated Oct. 12, 2018.

On the transaction record that asks, “Are you an unlawful user of, or addicted to, marijuana or any depressant, stimulant, narcotic drug, or any other controlled substance,” Hunter Biden said "No." Five years earlier, he had been discharged from the Navy Reserve after testing positive for cocaine.

In October 2018, the report notes, Hallie was searching through Hunter's pick-up truck because she was "suspicious" when she found a revolver Hunter had purchased days earlier at Starquest Shooters in Delaware.

Hallie wrapped the gun in plastic and drove to Janssen's Market, a high end grocery store where they were regulars, the report said. She put it in a trash can then went home and told Hunter what she'd done. He ordered her to go back to the store and get it but by the time she returned, it was gone.

The store contacted the authorities and Hunter and Hallie were interviewed by Delaware State Police. The gun was returned days later by a man who regularly rummaged through the store's trash bins, the report said.

Secret Service agents visited Starquest Shooters and asked for records that proved Hunter owned the weapon. The store owner refused to hand over the records.

“Secret Service agents approached the owner of the store where Hunter bought the gun and asked to take the paperwork involving the sale, according to two people, one of whom has firsthand knowledge of the episode and the other was briefed by a Secret Service agent after the fact,” Politico reported.

“The gun store owner refused to supply the paperwork, suspecting that the Secret Service officers wanted to hide Hunter’s ownership of the missing gun in case it were to be involved in a crime, the two people said. The owner, Ron Palmieri, later turned over the papers to the Bureau of Alcohol, Tobacco, Firearms, and Explosives, which oversees federal gun laws.”

At the time, Hunter Biden wasn't entitled to Secret Service protection, but agents reportedly were keeping an "informal hand" on him, sources say.

Not only was Hunter Biden dating his brother’s widow, but he later fathered a child with a stripper while he was still living with Hallie Biden.

In response to the Politico revelations, a White House spokesman said on Thursday that Joe Biden "did not have any knowledge of, or involvement in, the Secret Service’s alleged role in this incident, and neither he nor any family member was a protectee at that time."