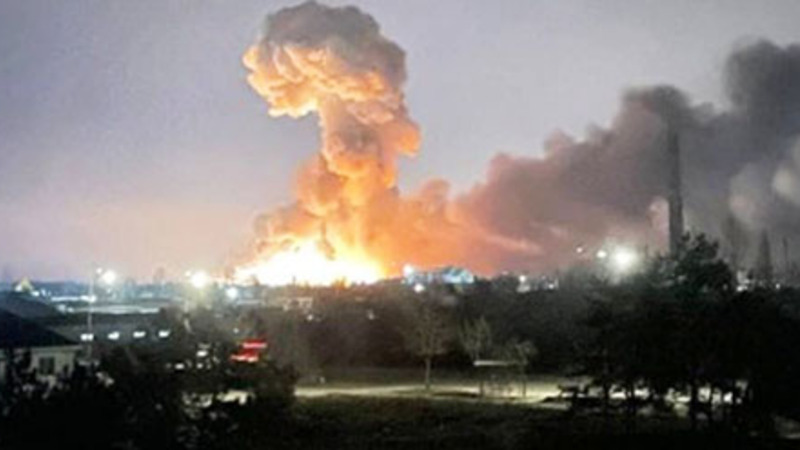 ukrblast by N/A is licensed under Screen Grab N/A
This war will not end in the foreseeable future. Most likely, it will lead to the destruction of Ukraine and the extreme weakening of Russia, exhausted by excessive exertion of forces and sanctions.
Special to WorldTribune.com

Russia's invasion of Ukraine was largely predictable but it also brought some surprises.

It was quite expected that the current U.S. administration would try to draw Russia into the "Ukrainian swamp" in order to weaken and isolate it as much as possible. It was expected that the inexperienced and naive Ukrainian leader would trust the promises of the Biden team and let them to drag his country into a devastating gamble.

It was expected that Russia, seeking to restore its former empire, would use Western provocations to establish its presence in a weak and corrupt Ukraine. It was completely unexpected that instead of a modern, maneuverable, and highly organized Russian army, we saw poorly trained troops erasing entire cities from the face of the earth like nomadic hordes. A terrifying surprise has been the use by the Kremlin against its brothers in blood and faith of the Chechen and Syrian militants. Finally, the biggest surprise was the desperate courage of the Ukrainians themselves and the high combat readiness of their armed forces.

This war will not end in the foreseeable future. Most likely, it will lead to the destruction of Ukraine and the extreme weakening of Russia, exhausted by excessive exertion of forces and sanctions.

The question is what goals should the West set for itself in this situation and should it strive for the complete destruction of Russia? Or, on the contrary, does it need a comparatively strong Russia?

Relations between the West and Russia are determined by three factors: geopolitical, economic, and cultural.

In geopolitical terms, Russia was natural buffer between the West and Asia, which includes the Muslim East and China. The weakening of Russia will mean a simultaneous sharp rise of Islam and China.

Related: On Nov. 1, Moldova held a fair and open election; On Nov. 3, America came under attack from within, December 1, 2020

Let's start with China. Russia is already turning into a raw materials appendage of a high-tech and powerful Chinese empire.

If Russia is cut off from the West, it will inevitably become completely dependent on China with its unlimited human and technological resources. This means that China, through its satellites in the Kremlin, will directly reach European borders. The old Soviet joke about the "Chinese-Finnish border" will become an ominous reality. The huge military resources of Russia will become a de facto part of the Chinese military machine, which can simultaneously threaten both the U.S. and Europe. It is the worst possible scenario for the West.

There are large Muslim enclaves in Russia itself, including Chechnya, other Caucasian republics and the Volga republics: Tatarstan, Bashkortostan and others. Islamic radical groups, branches of the Muslim Brotherhood and Salafis operate everywhere here. In the event of a losing or weakening of control from the Kremlin, they inevitably (as in other failed states) try to create a series of "caliphates," like the Islamic State. With the support of the gigantic Muslim communities in Russia's major cities, they will get a base for further advances to the West. In such case they will get assistance from Turkey, which regards significant parts of Ukraine and Russia as a natural part of the new Ottoman Caliphate. Crimea, the historical vassal of Turkey, will be drawn into the orbit of the new "High Porte" too.

The regimes of Central Asia are to a large extent supported by Russian bayonets. If Moscow withdraws from the region, the Afghan Taliban, successfully brought back to power by President Biden and his team, will immediately fill the resulting vacuum. The huge territories of largely artificial states, like Kazakhstan, Uzbekistan, Kyrgyzstan and others, will turn into a single "caliphate" and a natural reserve for terrorist groups. At the same time, masses of refugees from these countries will rush to the West in search of salvation. Compared to these unrestrained flows, the migration of 2015 will be child's play.

Only the wishful thinking of the ignorant and arrogant elites of the West can deny the reality of such a scenario. None of them imagined that the defeat of the USSR in Afghanistan would become a prelude to 9/11 and world Islamic terror, and the romance of the "Arab spring" would give this terror a new impetus.

In the economic aspect, the West is in dire need of Russian raw materials, not only energy resources, but valuable minerals. Russia is the world's largest diamond miner, a leading exporter of cobalt, vanadium, and platinum, gold, nickel and sulfur, silver and phosphates, and iron ore. The West cannot count on other sources of energy resources -- from the Persian Gulf, Iraq, Libya, and Iran. First, such resources are not enough, and secondly, they are located in an extremely unstable and unpredictable region. Attempts to replace traditional energy sources with alternative "green energy" are doomed to failure as well.

In the cultural aspect, both Europe and America are already forced to desperately fight for their national identities, undermined by such neo-Marxist ideologies as identity politics, Critical Race Theory, intersectionality, cancel culture and others.

So far, the national movements of North America and Europe are losing this game.

Eastern Europe remains the main so far the only stronghold of European cultural identity, however, in the event of the collapse of Russia, the countries of Eastern Europe and the Balkans will find themselves between a rock and a hard place: the globalist West, on the one hand, and China and Muslims, on the other. Their future, like the future of Israel, will be in doubt.

The fall of Russia as a strong country with stable Christian national traditions will leave America, already extremely weakened by globalists and progressives, alone in the fight against external threats. The consequences of this will be very sad for the U.S. as a state, and for Western civilization as a whole.

Thus, having lost Russia, the West will lose the powerful natural barrier that separates it from the hostile East, and will significantly strengthen both the Chinese empire and world Islam. The way to the West will be open.

This has happened three times in the past. The first time it occurred in the first millennium, when the hordes of the Huns broke through the defenses of the Byzantine Empire, invading Europe.

The second time was in the 13th century, when the Mongol hordes crushed Kievan Rus, destroyed Hungary and Poland and almost reached Prague, Austria, and German lands.

The third time the Christian West allowed Byzantium to die under the blows of the Turks in the 15th century and actually opened the way to Vienna for Ottomans.

In all three cases the West was saved by divine guidance. Will it save the West for the fourth time?

Born in Moscow, Alexander Maistrovoy is a journalist based in Israel and the author of “Agony of Hercules or a Farewell to Democracy (Notes of a Stranger)”, available at Amazon and Barnes & Noble.
ukrblast by N/A is licensed under Screen Grab N/A