Trump: Biden’s Jan. 6 remarks ‘hurtful to many people’; Americans ‘see through that sham’ 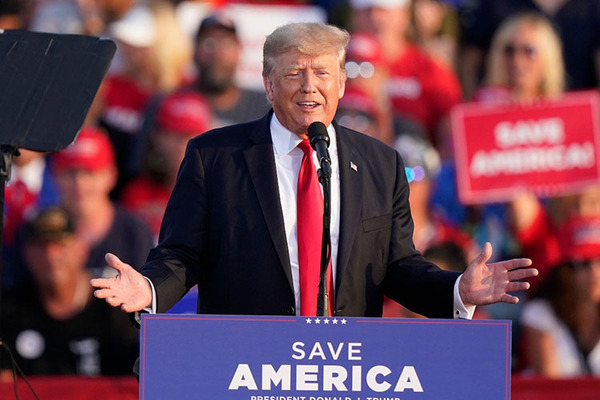 To watch Biden speaking is very hurtful to many people. They're the ones who tried to stop the peaceful transfer with a rigged election. Just look at the numbers. Does anybody really think that Biden beat Obama with the Black population in select Swing State cities, but nowhere else? That he would lose 18 out of 19 bellwether counties, and 27 out of 27 “toss up” House races, but somehow miraculously receive the most votes in American history with no coattails? That he would lose Florida, Ohio, and Iowa and win, even though it has never been done before?

They spread a “web of lies” about me and Russia for 4 years to try to overturn the 2016 election, and now they lie about how they interfered in the 2020 Election, too. Big Tech was used illegally.

Where did all those votes show up from in Georgia, where it was just revealed they sold ballots for $10 a piece, or in Pennsylvania, and Arizona, and Wisconsin. He acts like he's aggrieved, but we're the ones who were aggrieved and America is suffering because of it with poisonous Borders, record Inflation, a humiliating surrender in Afghanistan, $5 a gallon gas and higher, empty stock shelves, and rampant crime. America is a laughingstock stock of the world, and it's all because of the real insurrection, which took place on November 3rd, but this is an election year and MAGA Republicans should get elected and work with me to fix this horror that Joe Biden and the Democrats have brought us.

Never forget the crime of the 2020 Presidential Election. Never give up!

In a previous statement, Trump said:

Joe Biden’s voice is now the voice of desperation and despair.

His handlers gave him that speech to read yesterday because they know the unprecedented failures of his presidency and the left-wing extremism of the Pelosi-Schumer Congress have destroyed the Democrat Party.

Part of their panic is motivated by the realization that, just like the Russia Collusion Hoax, they cannot sustain the preposterous fabrications about January 6 much longer. The truth is coming out.

But for them, the worst part of it all is the knowledge that the American People are seeing right through their phony media event—which despicably compared a Pelosi-led security failure at the Capitol to the darkest days in American history and the deaths of 3,000 Americans.

The people see right through that sham. They see a cynical politician who ran for office promising unity who is now doing the most divisive thing possible—slandering his political opponents as domestic terrorists, just like insecure dictators do in communist countries.

The American People also see that January 6 has become the Democrats’ excuse and pretext for the most chilling assault on the civil liberties of American citizens in generations. It is being used to justify outrageous attacks on free speech, widespread censorship, de-platforming, calls for increased domestic surveillance, appalling abuse of political prisoners, labeling opponents of COVID lockdowns and mandates as national security threats, and even ordering the FBI to target parents who object to the radical indoctrination of their children in school. And this week, January 6 is also the Democrats’ excuse for trying to pass a radical Federal takeover of state election law. They are trying to BAN voter ID and other basic measures that can ensure the sacred integrity of the vote.

The reason the Democrats are doing all of this is not because they believe they will win a fair and honest election. It’s because they know they will overwhelmingly LOSE one.

Today, I am more confident than ever in the strength and common sense of the American People. They are counting the days until we will no longer have to be constantly lectured, lied to, and dictated to by corrupt politicians and their media partners. When we will no longer have to put up with this broken establishment’s hoaxes and its manufactured media narratives—And as Biden and his radical handlers know, that day is coming fast. Because in the months and years ahead, the American People are going to speak up, take action, and VOTE in massive numbers, and we are going to TAKE BACK OUR COUNTRY.

From the very beginning, all that Americans have wanted is great jobs, safe neighborhoods, strong borders, good schools, a proud nation, and a government that LISTENS to the American People. That is what our movement has always been about—and that is what we are focused on to this day.

Joe Biden and the Radical Democrats have failed on every front. But do not lose hope. America WILL be Great Again.