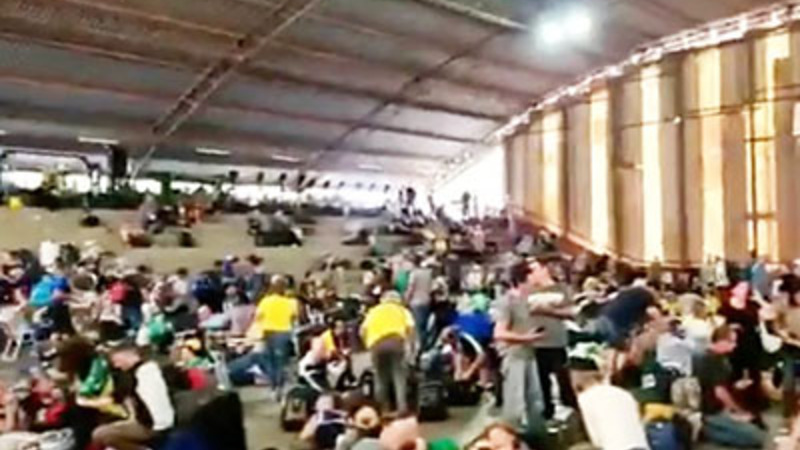 brazilheld by N/A is licensed under Video Image N/A
Protesters are being held in what is being described as Brazil's first concentration camp.
by WorldTribune Staff, January 11, 2023

In the wake of mass protests at federal buildings on Jan. 8, the regime of leftist President Luiz Inácio Lula da Silva has established what independent journalists are reporting is Brazil's first concentration camp.

Independent journalist Matt Tyrmand told Tucker Carlson on Monday night that “there were many agents provocateurs” at Brazil's National Congress storming Jan. 8, “doing incredible gross damage, breaking windows and such, and it looks like this is turning into a Reichstag fire and being used to clamp down on these democratic protests.”

“The camps have been disbanded by executive mandate”, Tyrmand said, “and now they’ve set up a concentration camp, where 1,200 Brazilian citizens are locked in the gymnasium of the National Police training center, and it has been reported that two of them have died.”

The protesters, who are being held without charges or lawyers, have not had access to food or water or toilets for more than 16 hours. Those being detained include children and the elderly.

“They put two thousand people in a warehouse without food or water, ignoring the presumption of innocence or due process. The prisoners have no access to their lawyers. The result is two people dead so far,” writes Rio Deputy Douglas Gomes.

Corporate media is carrying the water for leftists in Brazil who insist the ongoing protests over what is seen as a stolen election is an insurrection in the vein of Jan. 6 in Washington, D.C. Carlso and Tyrmand noted.

In 2023, however, corporate media does not have a fully complicit Big Tech to assist in suppressing what is really happening on the ground.

Journalist José Aparecido called it “a SERIOUS crime against humanity” and called for “international bodies for the defense of human rights to be called urgently, as there are reports of deaths that will be hidden by the militant press, just as the videos that show the infiltrators responsible for the invasions are being hidden. People in the first Brazilian concentration camp are desperate.”

On @TuckerCarlson discussing the “Reichstag fire” that was Jan 8th riot & how it served a key purpose for the @alexandre @LulaOficial @FlavioDino regime: to end the protest movement of 🇧🇷’s free people & clamp down w/a burgeoning gulag state. Two have died today at their hands. pic.twitter.com/q4WMhrCys9

Brasília-Brazil 10/01/23 🇬🇧Brazilians patriots are being held by the current government that deceitfully accused Bolsonaro of being fascist, nazi, extremist and NOW is showing the meaning of ‘🇧🇷concentration camp.’ 😔 ———- 🇧🇷Campo de Concentração do 🦑.

Listen to the message of this child who is in the concentration camp here in Brazil. pic.twitter.com/ZDhri7n1au

This 90 year old lady is being held in the concentration camp. She is known for coming to the rallies to pray for everyone. Pray for her and everyone over there in Jesus name! pic.twitter.com/FHPklOtNpN

brazilheld by N/A is licensed under Video Image N/A