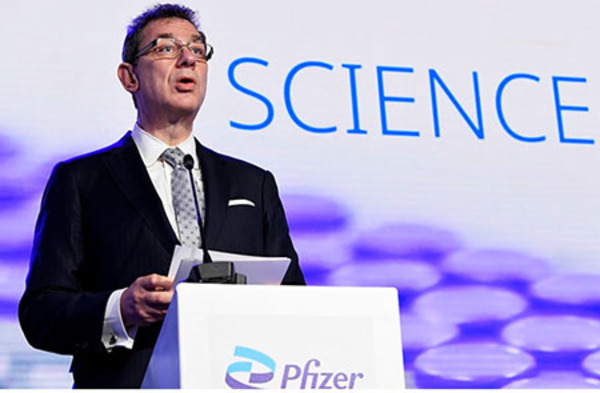 
Dr. Albert Bourla used an interview with the BBC last December to claim that “there is no doubt in my mind that the benefits, completely, are in favor of” vaccinating youngsters aged five to 11 against Covid-19.

He argued that “Covid in schools is thriving” adding: “This is disturbing, significantly, the educational system, and there are kids that will have severe symptoms.”

The interview was published on Dec 2 – before the vaccine had been approved by Britain’s medical regulator for this age group.

A complaint was filed with the Prescription Medicines Code of Practice Authority:


The complaint alleged that Dr. Bourla’s remarks about the children’s vaccine were “disgracefully misleading” and “extremely promotional in nature”, arguing that it breached several clauses of the Association of the British Pharmaceutical Industry’s (ABPI) code of practice.

“There is simply no evidence that healthy schoolchildren in the UK are at significant risk from the SARS COV-2 virus and to imply that they are is disgracefully misleading,” [the complaint read].


A code of practice panel, convened by the PMCPA, found that Pfizer had breached the code in a number of different ways, including by misleading the public, making unsubstantiated claims, and by failing to present information in a factual and balanced way.

Meanwhile, on this side of the Atlantic, American doctors continue to act in the same “disgracefully misleading” way with impunity. Dominant media propaganda organ CNN "reported" on Nov. 15:


Higher Covid-19 vaccination rates among US children could prevent thousands of pediatric hospitalizations and millions of missed school days, according to an analysis published Tuesday by the Commonwealth Fund and the Yale School of Public Health.

If school-age children were vaccinated with the updated Covid-19 booster shot at the same rate that they were vaccinated against flu last season – between 50% and 60% coverage – at least 38,000 pediatric hospitalizations could be averted, including about 9,000 stays in intensive care units, through March. And if Covid-19 booster coverage reached 80% among school-age children by the end of the year, more than 50,000 hospitalizations could be averted.

As WorldTribune noted at the very beginning of the year, one of the top questions Americans should be asking themselves in 2022 is whether they can trust their doctor anymore.

American physicians are telling demonstrable untruths about health in the COVID era.

Shockingly, the most flagrant falsehoods involve the most vulnerable of citizens, young children. CNN duly quoted one of the most compromised doctor’s associations in America and, sadly, it is entirely geared toward providing medical care to children:


“The overwhelmed health system means some families may not be able to get the care their child requires for a medical emergency,” Dr. Moira Szilagyi, president of the American Academy of Pediatrics, wrote in a CNN Opinion article, calling the situation a “crisis.”

That article urged parents to get their kids jabbed and boosted to help stave off the alleged catastrophe. Unsurprisingly, AAP has deep-rooted financial ties to the pharmaceutical and commercial health industries. And the Commonwealth Fund and Yale School of Public Health both are exhaustively connected to multi-billionaire vaccine fanatic Bill Gates and the ruling progressive establishment. Here’s but one example from the Commonwealth Fund website:

Dr. Bradley is the principle investigator for Yale on the Rwanda Human Resources for Health Program that was recognized by President Bill Clinton and the Clinton Global Initiative during their annual meeting in 2012. Dr. Bradley is also the recipient of a Bill & Melinda Gates Foundation grant that lead to the development of a novel framework of diffusion, dissemination, and widespread take up of health innovations.

Findings from this research can be integrated into future strategy development and large-scale implementation efforts undertaken by the Gates Foundation and the wider global health community.

Unfortunately, the snowball created by the monolithic worldwide coronavirus vaccine pressure campaign is rolling downhill and gathering mass. Emboldened by the enormous profits its has reaped over the past couple of years, Big Pharma is poised to roll out new drugs and vaccines for just about everything one could imagine. Forbes reported Nov. 14 of plans to unveil a vaccine to tackle fentanyl addiction:


Researchers at the University of Houston have developed a vaccine that could block the effects of fentanyl and prevent addiction, according to a new study that could unlock solutions to the opioid epidemic as more than 150 people die every day from overdoses connected to synthetic opioids.

Bill Gates in September went into full horror mode to push a vaccine for childhood pneumonia. He went out of his way to stress that he was thinking young. Very young:


The leading cause of death among children under age 5 often begins with little more than a cough.

Followed by chills, fever, and nausea.

And then as the child’s lungs get flooded with fluid, each breath becomes a desperate gasp for air.

What I’m describing is known as pneumonia, an acute respiratory condition that kills over 670,000 children every year.

Scaring parents to death has always been a hallmark of the jab promoters. But another effective strategy is to offer easy answers to those plagued by issues that require behavioral changes. Are you obese? Good news. Soon you won’t have to exercise and watch what you eat anymore to get fit. Take some pills and you’ll be slim and trim again.

Multinational business publication Fortune reported Nov. 8 in a Health Section article that reads much the way a Hollywood trade publication would discuss the earnings potential of a summer blockbuster movie:


For drugmaker Pfizer, a fortune amassed in the COVID pandemic is now paving the path to pharma nirvana: a weight loss pill worth billions.

The company has reaped nearly $100 billion from selling COVID-19 vaccines and treatments to U.S. taxpayers and foreign governments. With that windfall, it plans to get richer, sinking the cash into developing and marketing potential blockbusters for conditions like migraines, ulcerative colitis, prostate cancer, sickle cell disease, and obesity.

The health of Americans is something to be speculated on like real estate or commodities:


In one trial, more than half of obese patients on a high-dose Eli Lilly and Co. injectable lost a fifth of their body weight — results that have raised the drugs’ cachet as a diet aid in Hollywood, Silicon Valley, and other social niches where cost is no issue and being thin is always in.

Wall Street analysts are predicting such massive demand for these drugs that Pfizer “can find a place there with marketing” if its version works, though it is at least two years from licensure, said Mohit Bansal, a Wells Fargo analyst. By 2035, the Lilly drug alone could earn $100 billion a year for its formulation, according to one Bank of America analysis.

The article was co-authored by Kaiser Health News. KHN is operated by the Kaiser Family Foundation. WorldTribune wrote of KFF in Nov. 2021:


Is it surprising to learn that the Bill & Melinda Gates Foundation has given the organization more than $27 million since 2003?

Other KFF funders include:

Facebook and Google (through Poynter — the fact-checking “journalism” institute)

As an eventful 2022 draws to an end and a new year beckons, we’ll ask again that same question we posed to readers in the first days of January: Do you trust your doctor anymore, and if so, why?

bourlapfzr by N/A is licensed under Video Image N/A