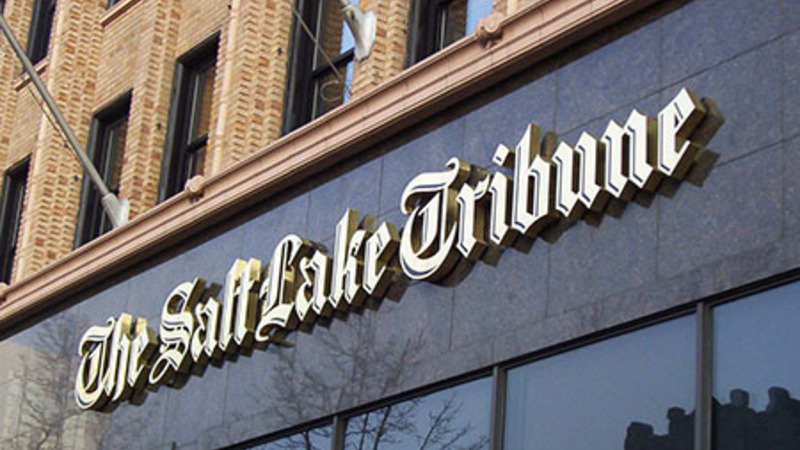 The following was actually written and published by the editorial board of The Salt Lake Tribune:

"Were Utah a truly civilized place, the governor’s next move would be to find a way to mandate the kind of mass vaccination campaign we should have launched a year ago, going as far as to deploy the National Guard to ensure that people without proof of vaccination would not be allowed, well, anywhere."

And there you have it. The largest newspaper in Utah not only declaring that those they view as the unclean masses should be prohibited from participating in society, but actually calling for the American military to be used against Americans.

The editorial, headlined "Utah leaders have surrendered to COVID pandemic", was published on Jan. 15. So, two days after the U.S. Supreme Court in a 6-3 decision blocked Team Biden's vaccine mandate for businesses with 100 or more employees, you have the Salt Lake Tribune urging Gov. Spencer Cox, a Republican, to still "find a way" to mandate the Covid vaccine.

Utah, by the way, was involved in a lawsuit against the Biden administration's policy that would have used the Occupational Safety and Health Administration (OSHA) to force private employers with 100 or more employees to mandate the vaccine or regular testing.

The editorial, which in pre-Covid, pre-Trump times would be something you would expect to see in the China Daily (which has reportedly paid millions of dollars in funding to some of the most influential American newspapers) and not a U.S. daily, slams Utah officials:

"Government officials, mostly but not exclusively Republicans, were apparently determined not to be caught governing in the face of this challenge. Any move or recommendation to mask up or, when safe and effective vaccines became available, to make vaccination a requirement of admission to public places and society in general was shouted down as an unwarranted imposition on individual freedoms."

Utah Lt. Gov. Deidre Henderson, a Republican, tweeted in response to the editorial: "The truth is Omicron is out of control everywhere. Even in places with mask and vaccine mandates. We always push vaccines, but even vaccinated ppl are catching it. It’s easy to take shots from the cheap seats but this is the sort of nonsense that makes editorial boards irrelevant."

The Salt Lake Tribune's editorial also pushed the false narrative of ivermectin, which has been proven effective in scientific study after scientific study and has been approved for use in many nations as an early Covid treatment, as a mere "horse dewormer."

The Salt Lake County Republican Party issued a statement on the editorial from Chair Chris Null: The Editorial Board pretends to have all the answers, disparaging a proven safe and highly effective Nobel Prize-winning drug by calling it a “horse de-wormer”, in effect giving (bad) medical advice. They manage to echo the level of hate and bigotry that sounds more like 1933 Nazi Germany, as Hitler took over, than present-day Utah – the state that “keeps the American dream alive.”

Null added that the Salt Lake Tribune "must apologize to the people of Utah and reign in these board members before their infection spreads worse than the pandemic we are already fighting."

saltlktrib by N/A is licensed under Screen Grab N/A