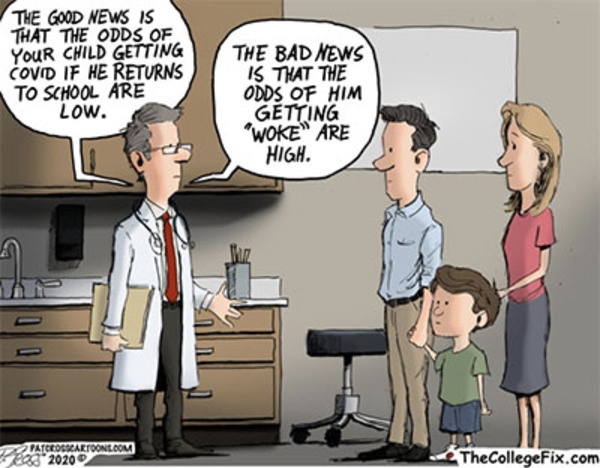 Neo-Marxist indoctrination of children appears to be unavoidable, whether parents like it or not.

From prep schools to public schools, in blue states and red states, students are being force-fed a curriculum rich in equity, diversity and anti-racism, a report noted.

Even in school districts that are still struggling to reopen for in-person learning, the move is on to set up offices of diversity, equity and inclusion, hire directors, bring in consultants for trainings and undergo “anti-racism audits,” Valerie Richardson wrote for The Washington Times on May 20.

In Oklahoma, Norman Public Schools hired its first full-time DEI (Diversity, Equity and Inclusion) director and spent $22,750 on equity consultants during the 2020-2021 academic year even though the district lost students during the covid pandemic, the report said.

“What’s interesting to me is that so many people have a misimpression that this is a California or Manhattan issue, and this shows that this is in red states. This is in conservative areas,” said Nicole Neily, president and founder of the newly formed Parents Defending Education advocacy group.

“This is a public school district, but it’s in places where I think a lot of community members aren’t even aware that this is in their backyard.”

Though critical race theory is seen by many as little more than repackaged Marxism, schools nationwide are making it a party of their curriculum, insisting that they are attempting to confront "systemic racism."

“This is a serious problem that parents are realizing across the country,” Elizabeth L. Schultz, a former Fairfax County school board member, said Thursday on Fox News.

“The pandemic has revealed that our education system is being weaponized by school boards.”

The social justice push in schools gained momentum from the Black Lives Matter riots that followed the death of George Floyd.

“From Beaverton, Oregon, to Wellesley, Massachusetts, we have noticed a pattern,” said Asra Q. Nomani, PDE vice president of strategy and investigations. “Since June 2020, high-priced ‘diversity, equity and inclusion’ activists and consultants have exploited George Floyd’s death to get millions of dollars in new business with school districts and schools around the country.”

Among those jumping on the social justice bandwagon:

• In Indiana, Noblesville Schools hired its first equity and inclusion “coach” in November. A month later, Carmel Clay Schools brought on a DEI officer for the first time at an annual salary of $90,846, The Indianapolis Star reported.

• In New Hampshire, the Manchester School District announced in February a job search for its first chief equity officer at an advertised annual salary of $110,000 to $120,000 as the system seeks to implement its Excellence and Equity for All Learners plan.

• In Kentucky, the Paducah School Board approved the hiring of a chief equity officer in April after an 18-year-old photo of the superintendent in blackface appeared online. The job includes coordinating an equity audit with the University of Kentucky, according to The Paducah Sun.

• In Maryland, Montgomery County Schools allocated a whopping $454,000 for an “anti-racist system audit” by the Mid-Atlantic Equity Consortium, according to documents obtained by Judicial Watch released Wednesday.

• In Virginia, Fairfax County Public Schools agreed to pay $49,600 to the Leadership Academy, a New York-based consultant, for “survey and policy work,” as shown on documents posted by Parents Defending Education. The survey “asks respondents biased, unscientific leading questions about upending a policy that requires teacher impartiality in discussing ‘controversial issues’ and creating a new ‘Anti-Racist, Anti-Bias Curriculum,’” according to the organization.

If districts are spending this much on equity training, consultants and audits, asked Neily, then what is being shortchanged?

“How many children are reading at grade level in that school district? How many are performing math at grade level?” she asked. “Schools have gotten away on focusing on what we send our kids to school for, and when they turn into these other things, what are they not doing?”