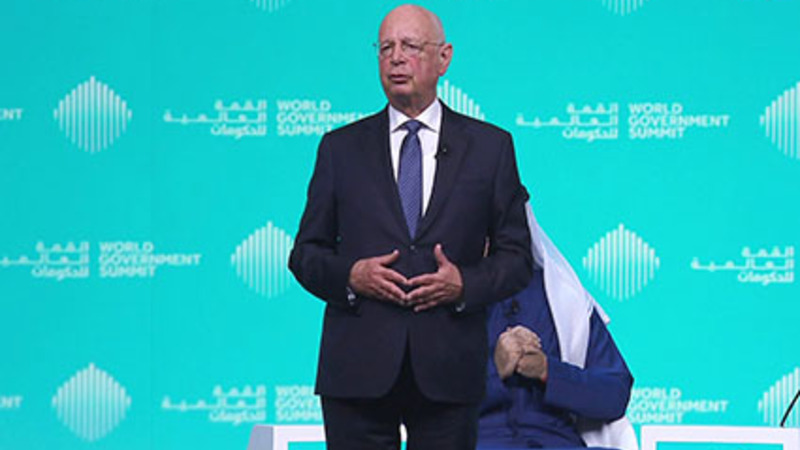 sumschwb by N/A is licensed under Video Image N/A
Klaus Schwab at the World Government Summit.
by WorldTribune Staff, March 31, 2022

The unelected globalist and World Economic Forum (WEF) founder Klaus Schwab proclaimed on Wednesday that a single world government is needed to solve global problems such as climate change, trade, and economic disruption.

Schwab praised the World Government Summit as a place for governments to “go beyond crisis management,” while adding, “In times of crisis, the role of governments is more important and more relevant than ever.”

He did not address the role played by those governments in the creation of the crises buffeting the world's population.

During his keynote speech on the opening day of the World Government Summit (WGS2022) in Dubai, Schwab insisted that a “Fourth Industrial Revolution” has arrived, major and enduring change is on the way, and rapid widespread cooperation between world governments is needed.

"The impact of the Fourth Industrial Revolution accelerates global change in a much more comprehensive and faster way than previous industrial revolutions. Despite all the challenges, we have to uphold the responsibility we have towards the next generation through collaborations on a national and a global level," Schwab said.

"Our futures are intrinsically connected and that requires collaborative responses."

Schwab went on to say during the session, Our World Today: Why Governments Need to Act Now: “The world has to overcome not only the damage done to our economies and our societies by COVID-19, it also has to confront the repercussions of a dangerous clash between major global powers.”

It was Schwab who wrote a book celebrating the Covid pandemic not as a crisis but an opportunity for a "new normal."

In "Covid-19: the Great Reset", he wrote: "At the time of writing (June 2020), the pandemic continues to worsen globally. Many of us are pondering when things will return to normal. The short response is: never. Nothing will ever return to the ‘broken’ sense of normalcy that prevailed prior to the crisis because the coronavirus pandemic marks a fundamental inflection point in our global trajectory."

It has also been pointed out that "Build Back Better" is also the slogan of the Great Reset and the man who invented it, Klaus Schwab.

Prof. Klaus Schwab, Founder and Executive Chairman, @wef, praises the measures taken by the Government of UAE towards the 4th Industrial Revolution at the #WorldGovSummit#WGS2022 pic.twitter.com/d5MiJ5uotY

sumschwb by N/A is licensed under Video Image N/A