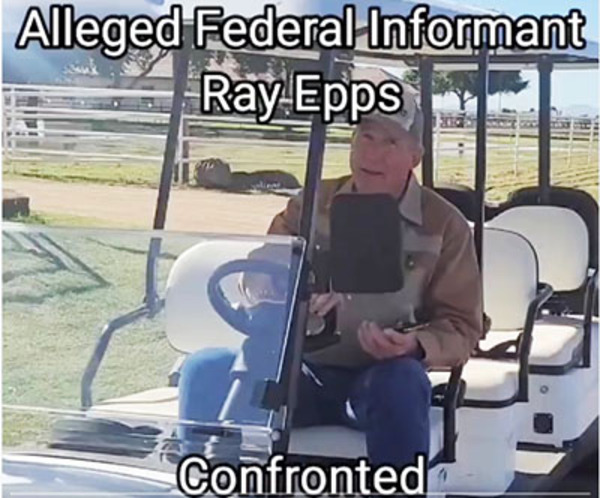 Ray Epps, a prominent member of the Oath Keepers, has been implicated as one of the “primary orchestrators” of the first breach of the U.S. Capitol on Jan. 6. He has never been arrested for his role in the breach and is being protected by the FBI, according to independent media reports.

Two citizens confronted Epps at his ranch in Arizona on Oct. 27 to inquire about his alleged role as a federal informant during the events of Jan. 6. Doing the job journalists are paid to do, one ended up being followed and questioned by the FBI, National File reported on Nov. 5.

Kyle Clifton told National File that his friend Greyson was followed home from the grocery store by FBI agents and questioned about Jan. 6.

After Clifton and Greyson confronted Epps at his ranch and video of the incident went viral, they were contacted by Epps’s daughter, Tiffany Jones. Clifton, with the help of the American Populist Union, was able to conduct a video interview with Jones. (See the full interview here.)

During the interview, Jones said she does not know “for sure” whether or not her father is an FBI informant, but if he was the news “would not surprise her at all.”

On Nov. 5, a day after Clifton's interview with Epps's daughter was published, the FBI showed up at Greyson's home to talk with Clifton and Greyson.

“Ray Epps’s daughter reached out to me. She revealed some pretty interesting information. Just after that interview, my friend Greyson was approached by the FBI. He was followed home from the grocery store and they have knocked on his door. They are asking him about January 6. They seem to be asking general questions,” Clifton told National File. “They were fishing to see what we knew about Ray Epps.”

The investigative reporting team at Revolver revealed in an Oct. 25 report that Epps appears to have "led the ‘breach team’ that committed the very first illegal acts" on Jan. 6. "What’s more, Epps and his ‘breach team’ did all their dirty work with 10 minutes still remaining in President Trump’s National Mall speech, and with the vast majority of Trump supporters still 30 minutes away from the Capitol."

Revolver also discovered that the FBI had "stealthily removed" Epps from its Capitol Violence Most Wanted List on July 1.

Gen. Michael Flynn noted in a Telegram post: "The FBI needs a complete overhaul from the very top to the very bottom (along with other agencies, activities and departments of the federal government). The people of our country no longer respect nor trust the FBI. For all former federal FBI officers and agents, either weigh in somehow to fix your former agency or step up for the country. No more sitting on the sidelines in quiet conversations discussing how screwed up things are and how "it" can never be fixed. I know how to fix it!"

I interviewed potential FBI Informant Ray Epps' daughter. I am not a journalist. I just want to help America find answers.

I will post clips throughout the week. Full interview linked on my telegram and linked on @populistunion YouTube below. pic.twitter.com/P21VLaASnt — Kyle Clifton (@kyleisbased) November 4, 2021

We have now been followed home and questioned by the FBI after our videos confronting Ray Epps as an alleged Federal Informant and interviewing his daughter. The FBI claims not to know who Ray Epps is.@kyleisbased@AmericanGreyson pic.twitter.com/oq5NpLXtuO