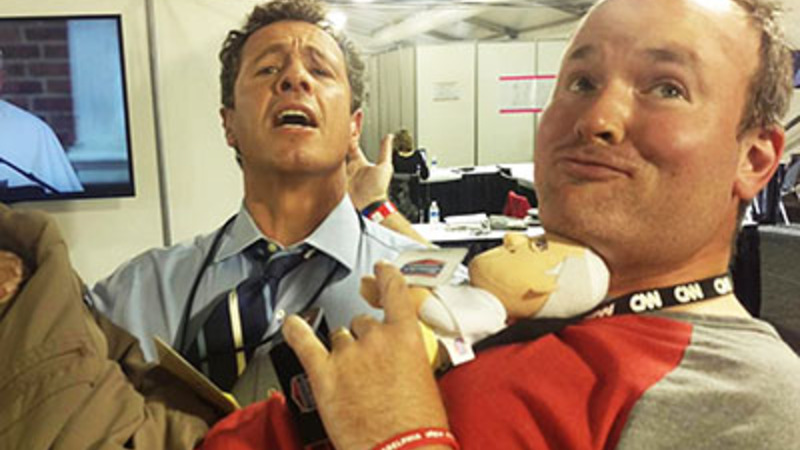 thisiscnn by N/A is licensed under Twitter N/A
During his CNN career, John Griffin, right, boasted about working 'shoulder to shoulder' with Chris Cuomo. Photos from his social media accounts show the pair hanging out in various locales — including the White House.
by WorldTribune Staff, February 1, 2022

The wife of accused pedophile and former CNN producer John Griffin has sued for divorce, according to court documents obtained by the New York Post.

Allyson Griffin, 46, is seeking full custody of the couple’s three children, alimony, and the family’s $4.5 million mansion in Norwalk, Connecticut.

She claims in court papers that John Griffin’s “arrest for various crimes has created a toxic environment.”

The Jan 17 court filing requests that John Griffin be barred from entering the Norwalk estate.

Griffin, 44, is accused of befriending women online and urging them to come with their daughters for “sexual subservience” training at his Ludlow, Vermont ski villa.

At least one mother allegedly showed up with a 9-year-old girl she claimed was her adoptive daughter, records show.

According to a Department of Justice press release, Griffin told his alleged prey that a “woman is a woman regardless of her age. Griffin sought to persuade parents to allow him to train their daughters to be sexually submissive.”

Griffin was indicted in December by the U.S. Attorney of Vermont. He faces 10 years to life in prison if convicted.

John and Allyson Griffin have a 9-year-old daughter and twin sons who are 7.

“Allyson, like everyone else, was stunned and horrified to hear about the charges against her estranged husband, and her heart absolutely breaks for any potential victim in this case,” her attorney Jon Whitcomb told the New York Post. “She had absolutely no knowledge of any alleged wrongdoings. The couple has been separated for nearly two years, and Allyson has now filed for divorce. She remains focused on raising her children and serving her community.”