The Romulus Report: Inflation and a coming commodities supercycle?

mrktw by N/A is licensed under Screen Grab N/A
Special to WorldTribune, December 6, 2021

I am not talking about a double secret Peloton bike that only Skull and Bone members can buy. Or a flying bicycle.

"Supercycle" refers to a group of related assets experiencing a long-term move in the same direction. Generally speaking, the asset class sees new highs at least every six months and there is a persistent nature to the uptrend. There have been many supercycles in my lifetime, a few of which are still going on.

Another term for supercycle is "secular move." Saying that stocks are in a cyclical bull market means a typical four year move up, followed by a 35% bear market that should last 14 months, on average. Declaring stocks are in a secular bull market means any selling will turn out to be much shallower and more short-lived than during a full-blown bear market, that instead stocks will keep pounding higher for several years.

From March of 2009 to the present day, stocks have been in a secular bull market. A supercycle.

Bonds were also in a supercyle (notice I used the past tense) from 1981 until last year. After peaking at almost 16% in 1981, the yield on the US 10-year bond fell to under 40 basis points during the covid crash. It is currently at 1.54%. For 39 years there was a persistent nature to falling bond yields—which results in rising bond prices—with bond investors reaping returns from interest payments and higher prices for their bonds.


This four-decade move had far reaching implications that touched almost every aspect of our lives. Inflation was considered dead, until recently. The stock market performed amazingly well, creating unprecedented levels of wealth and the standard of living in most of the world has improved dramatically. Compare this to the 1970’s, the last time inflation was a problem in the modern world.

Supercycles can have that effect. 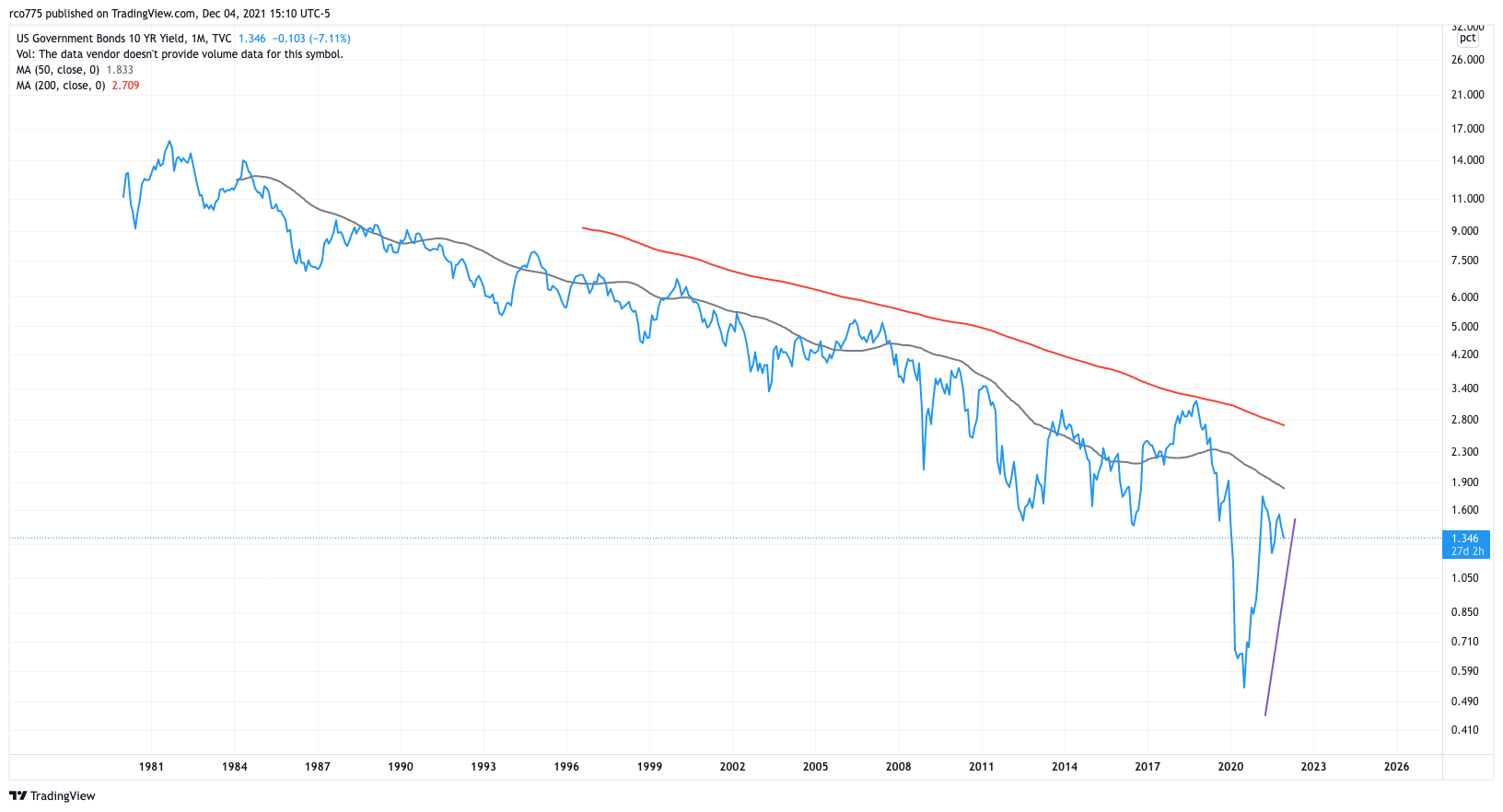 This is a chart of the US 10-year bond yield, going back to 1980. The chart's scale is proportional by percentage. The bounce from last year has been the largest percent upside move in history. The red line is the 200-month moving average. I expect yields will react near that line if they get there in the next year or two.

There are a few important points to remember regarding this discussion. First, just because the bond market supercycle is over does not mean that bond prices are now in a sypercycle bear market. It is too early to tell. We know a cyclical bear market is happening right now, but we don’t know how if rates will continue to move higher for the next several years. If rates eventually break above the red line, along with a move above that last major swing high in late 2018, odds will increase that a very long-term move is in place. Until then, it is best to avoid bonds, but don’t fall into the camp that anticipates runaway yields like the 1970’s.

Inflation is picking up this year as interest rates have gone higher. It has been enough so far to give a lift to the commodity sector, with oil prices just off multi- year highs, hog and cattle futures seeing upside runs this year and farm land prices near all-time highs. Corn, wheat, beans, sugar and coffee prices have all seen huge spikes since last year. Obviously, this is all correlated.

Does it mean, however, that we are about to enter a commodity supercycle? A little pick and shovel work should help us figure that out.

Just like the S&P 500 is the most important stock market indicator in the world, the US 10-year bond rate is the indicator to watch for inflation and commodity prices. Everything depends on how high the yield goes over the next 12 months.

Here is a chart of the 10-year rate on a weekly frame. That upper purple line must be broken before any further discussion of a commodity supercycle. 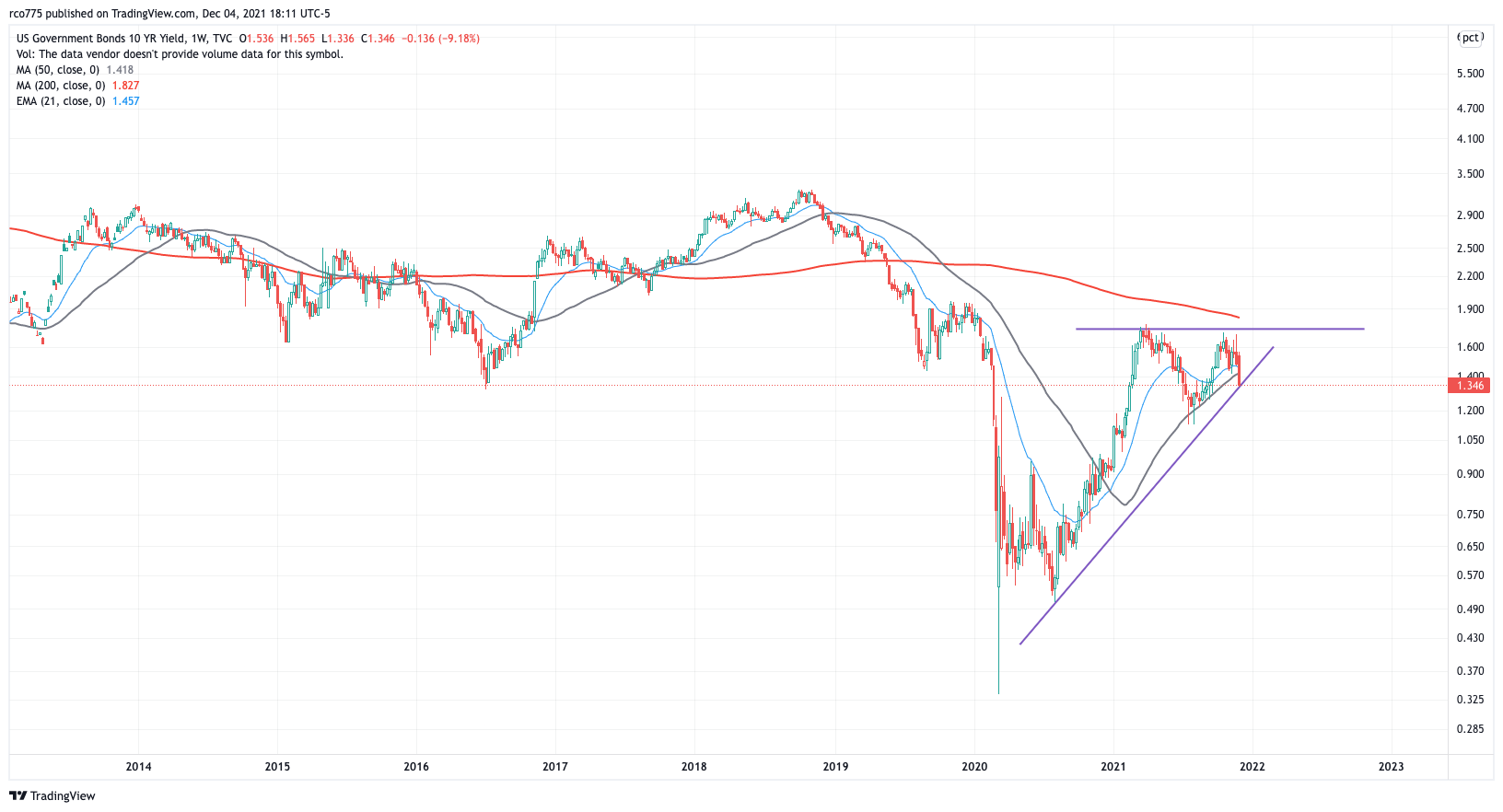 The chart suggests yields are going higher over the next 12 months. That will support oil prices and keep the agricultural commodities in their uptrends.

If this is the early stage of a commodity supercycle, an interesting disconnect could take place from what many expect. Traditionally, oil has been the largest driver within the commodity asset class. Supercycles last years and sometimes decades. If food and industrial and precious metals are embarking on a multi-year uptrend, oil could easily be left behind starting in a year or two. I believe we will see a tremendous drop in fossil fuel use over the next 20 years, which will decimate the oil industry. Silver, copper, corn and bean prices can keep going higher in this situation, but oil could see a gradual decline after this initial move matures next year.

For now, the idea is to stay away from bonds and stick with the commodity plays, if that is right for you. There are two ETF’s that offer perfect exposure to the commodity world without oil. DBA is an agricultural ETF, holding corn, beans and the meats. DBB is an industrial metals ETF with major holdings in nickel, tin and zinc.


Wealth, like Rome, cannot be built in a day. But, like Rome, it can be lost in a day. Watch for future announcements from Romulus about profitable market moves, important indicators, and major market swings. For trading education, mentoring, or to beat the markets with Romulus' trading group, contact romulus@groktrade.com or go to www.groktrade.com/romulus.

In his real-life existence, Romulus started on Wall Street in 1994 and traded for a hedge fund for 13 years. Since 1994, he has called every major market top ahead of time and profited from them, including the break of the Dot-com bubble in 2000, the market crashes of 2008 and 2009, and the Covid crash of 2020. For the past 12 months he has been working with investors and traders to actively manage their portfolios by growing wealth, not risk, as a teacher and mentor working with Grok Trade, a stock trading educational company in business since 2007.
mrktw by N/A is licensed under Screen Grab N/A

Abortion radical refused to appear on program with pro-lifer; Turned to Jake Tapper instead

Who is Rachel Powell? 'Media' lose interest in woman who smashed Capitol windows on Jan. 6

After the jab: 'Nonstop excruciating pain,' deprived of her children, and facing homelessness
© 2022, Trib 247, all rights reserved